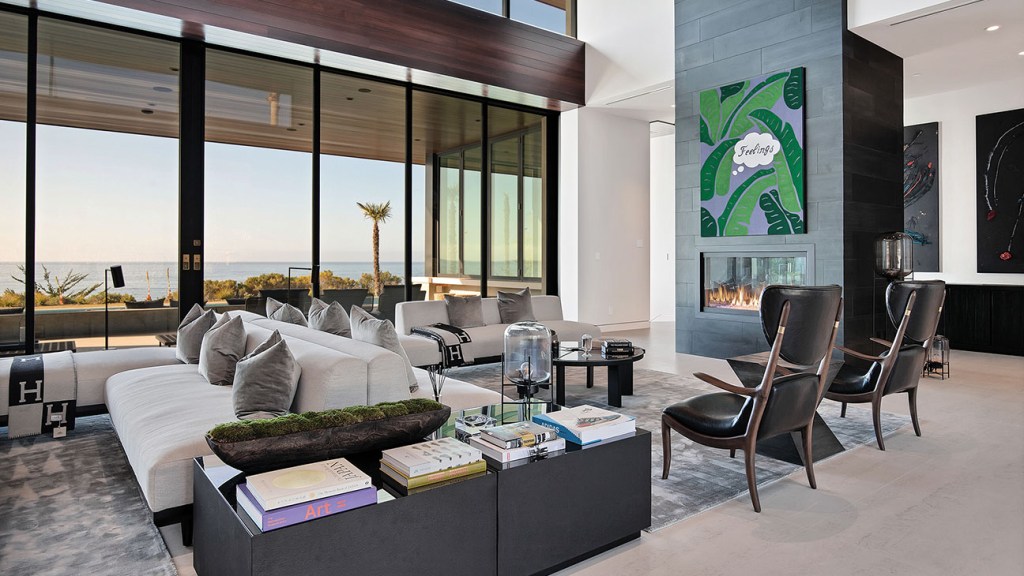 The story is staging legend. In 1998, Meridith Baer, a former actress, decorated a friend’s house that had been sitting on the market. It sold within days to a Hollywood exec, and soon other real estate agents came knocking. Baer rented a moving van and storage space and founded what would become Meridith Baer Home, thus bringing high-end staging to Los Angeles.

Almost 25 years later, the “O.G. of staging” is still in business (with inventory stored in 350,000 square feet of warehouse space) as her field becomes increasingly crowded. “I love the competition. I love seeing other people out there and seeing what other people are doing,” says Baer, whose clients have included Halle Berry and Harrison Ford.

Many real estate agents and developers today work with an archrival company, Vesta, the staging enterprise founded in 2016 by Baer’s nephew and niece, Jamie Morse and Brett Baer (leading to a family feud that continues to this day). “Vesta is very versatile,” say Douglas Elliman agent Cory Weiss, “and they assign you a designer they think will fit.”

Million Dollar Listing L.A. star and Douglas Elliman agent Tracy Tutor likes Vesta for its quick results. She credits the company with transforming the Laurel Canyon home of Dancing With the Stars‘ Gleb Savchenko and ex-wife Elena Samodanova, after it was trashed by tenants, in one week. The home sold within four days with multiple offers.

This speed is possible because of Vesta’s massive warehouse in Vernon, California, its team of 25 designers and a serious investment in innovative technology. “Our designers can design a $30 million house while they’re sitting at their pool,” Brett Baer says. “They’re dragging and dropping like an online shopping cart all of the furniture that we have in our system.” Vesta also has launched a home furnishings brand. “Customers are purchasing furniture that they’re seeing in our staging projects,” explains Vesta CEO Julian Buckner.

From Left: Before shot of a 12,000 square-foot home in Santa Monica, which ASH Staging decorated. The same residence after it was staged.
Courtesy Of Ash Staging; Christian Harder

Recently an ultra-luxury competitor, ASH Staging, has entered the fray in L.A. An arm of ASH NY (honored by Architectural Digest as an AD100 design firm), the on-demand service focuses on exquisite details from blue-chip art to custom lighting.

“Historically, staging has always sort of eschewed the personal touches and the site-specific in favor of that which appeals to the widest audience. Of course, appealing to the market is important, but our ethos is much more about figuring out what the real soul is within a space,” says Andrew Bowen, ASH NYC partner and head of staging.

This year, ASH staged a home at 184 S. Hudson Ave. in Hancock Park and turned a dated wine room into a children’s room. The property, which sat on the market for two years, sold for $13.8 million in July, the highest sale in the neighborhood this year.

Success stories like these have made it easier for agents to convince sellers to invest in staging. “I think the culture is changing in terms of what it takes to sell a property,” says Sotheby’s International Realty agent Eric Lavey. “When I started 17 years ago, getting a client to say yes to staging was very rare.”

But staging can still be a hard sell. “It depends on the mind-set of the seller — if they understand the principle of attracting the highest volume of buyers and receiving more offers submitted on their property, then they come into the conversation asking their agent for staging recommendations or property appearance improvement,” says Douglas Elliman agent Ernie Carswell. “If not, then the discussion is more strained, and the client may not see the need to perform the appearance improvement.”

In L.A.’s hot market, staging costs sometimes run into six-figure territory — “an absolute fortune,” says Douglas Elliman’s Juliette Hohnen. Notes Lavey, “For an average home size around 3,000 to 4,000 square feet with four bedrooms and an outdoor living space, we usually see the top-end firms charging anywhere from $40,000 to $60,000 — and this can vary based on particular needs for the property. We have had large properties on significant acreage go well above $100,000.”

Meridith Baer Home tricked out this home office in a Bel Air mansion. “The warm brass and walnut tones of the bookshelves complement the marble fireplace, while the neutral soft upholstery offers a place for the homeowner to relax and catch up on emails,” says Baer.
Courtesy Of Meridith Baer

David Berg of Compass’ Smith & Berg Partners recently sold a home in Santa Monica where costs to give the property a fresh look totaled $88,000, with $20,000 for staging, $45,000 for interior and exterior paint and $18,000 for new landscaping. Before “cleaning it up,” says Berg, he estimated that the house might be able to sell for slightly less than $5 million. After the quick redo, the house was listed at $5.7 million and sold for $5.85 million. “And we had multiple offers,” says Berg. In select cases, agents will front the costs of staging to a seller, money that is paid back in escrow.

On top of all this, real estate agents also can play a major part in how a home is styled. “The reality is most [buyers] aren’t looking at the house, they’re looking at furniture,” says Hohnen. A fan of mood boards and custom pink toilet paper, Hohnen is wary of agents’ increasing over-reliance on stagers.

“I think you have to bring something more than just calling a stager,” she says. “There is an agent that I won’t name, but they have, let’s just say, not a great sense of style. And she can use the same stagers as me and it’ll look like complete shit.”

Styling Hollywood‘s Adair Curtis, an interior designer and stager whose clients include Dulé Hill and Ava DuVernay, adds that it’s not just visuals that seal a sale: “It’s definitely a curation for sound, for scent, for texture. That’s the only way to make it not feel like a mausoleum or a museum. You need to get someone to feel like, ‘Actually, I really could live here. This feels really good.’ ”

This story first appeared in the Dec. 1 issue of The Hollywood Reporter magazine. Click here to subscribe.