What’s behind the rise in gun ownership for people of color? 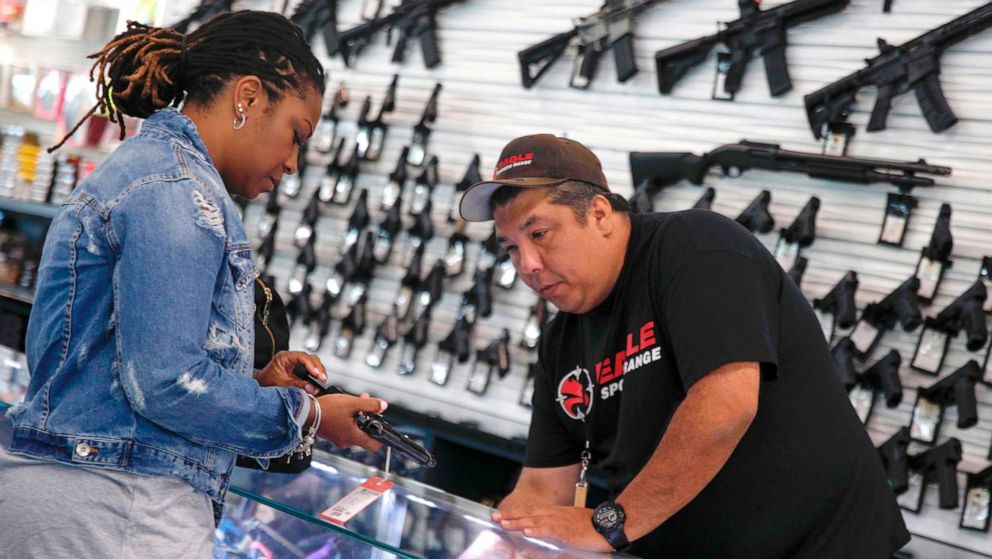 This report is a part of “Rethinking Gun Violence,” an ABC News series examining the level of gun violence in the U.S. — and what can be done about it.

Stories of assault, verbal attacks and deadly shootings against Asians in the Bay Area put him and his wife on edge, he said. He feared an assailant may see them as perfect victims for an attack.

“Age is beginning to make me one of those easy targets,” said Clyde, who asked ABC News to use only his first name for his protection.

Which is why, he said, he bought his first handgun.

“I don’t go out looking for trouble,” Clyde, who is now a member of the Asian Pacific American Gun Owners Association, said. “But to ignore the inconvenient truth that Asians are targets isn’t going to stop the attacks,” he added.

Clyde is one of the many people of color who purchased a legal handgun last year, according to a number of gun trade groups.

‘I have two daughters, I wanted them both to know that it’s OK for you to own a weapon and it’s OK to have them in defense of your home.’

The National Shooting Sports Foundation, a national trade association in the firearms industry, says that when comparing 2019 to 2020, there was a 58.2% increase in gun purchases among Black people, a 43% increase with Asians and 49% among Latinos. The NSSF estimates that 40% of gun sales overall were for first-time gun buyers.

Watch ABC News Live on Mondays at 3 p.m. to hear more about gun violence from experts during roundtable discussions. Check back tomorrow, when we look at what lessons the U.S. can learn from other countries’ gun policies.

There are many factors motivating new gun purchases among people of color: some buyers who spoke with ABC News cited concerns about safety in the U.S., while others claim that pro-gun outreach by various gun advocacy groups is behind the rush to arm oneself.

In 2020, the U.S. saw the highest number of hate crimes in more than 10 years, according to the FBI.

A woman speaks to a salesman about buying a gun before taking her concealed carry certification test at the Eagle Sports gun range in Oak Forest, Ill., July 16, 2017.

Anti-Black hate crimes rose nearly 40% from 2019 to 2020, according to the statistics. There were 2,755 reported incidents targeting Black or African American people in the U.S. in 2020, making this demographic the most targeted racial group by a large margin.

And hate crimes against Latinos dropped just slightly, but still surpassed 500 incidences in both years.

Police killings and xenophobic rhetoric have also intensified the racial and social divide in the United States — spurring those in fear to make new firearm purchases, according to gun owners who spoke with ABC News.

The National African American Gun Owners Association told ABC NewsOne that the group has seen a surge in membership — averaging about 1,000 new members every month.

Nikki Duncan, a Black woman who is a member of NAAGOA and the Strong Arms Gun Club, says these groups have helped her and others get acquainted with their guns and learn safety practices among those who understand the needs and nuances of different racial or ethnic groups.

She said the recent instances of police violence prompted her to buy a gun.

The names of Black men and women who have been killed by police are seen written on a piece of cardboard during a Black gun owners march to the governor’s mansion in Oklahoma City, Okla., June 20, 2020.

“Not only Breonna Taylor, but the young man, [Botham Jean], who was shot in his home while watching television where an off-duty police officer came into his home and shot and killed him,” Duncan said. “With the kind of climate that we’re living in right now, I wanted to be a gun owner, but I also wanted to be a responsible gun owner.”

She added: “I have two daughters, I wanted them both to know that it’s OK for you to own a weapon and it’s OK to have them in defense of your home.”

Gun owner Ruben Garcia, a Puerto Rican living in Florida, said he started buying more guns to protect his home and family due to the anti-Latino and anti-immigrant rhetoric during the Trump administration.

“Everybody saw what was happening during Trump’s time and everybody was scared,” said Garcia. “So people start arming themselves because they do not want to be a victim.”

“I encourage other minorities every chance I get, to get their licenses and to get a firearm,” Garcia said. “This is your Second Amendment right, your right as an American.”

Communities of color mark uncharted territory for gun groups and manufacturers — in sales, representation and advocacy.

According to the Pew Research Center, white men are more likely to be gun owners: about half say they own a gun, compared with about a quarter of white women and nonwhite men and 16% of nonwhite women.

Pro-gun groups have set their sights on communities of color in recent years — but their outreach has hit an all-time high, as they promise protection to new gun owners, and quell stalling white gun ownership numbers, the NSSF says.

“People were buying those guns, primarily out of concern for their own personal safety,” said Mark Oliva, National Shooting Sports Foundation’s director of public affairs.

Gun groups say that they have increased the representation of Black, Asian and Hispanic gun advocates and have targeted their marketing to reach more people of color. These efforts to connect to these previously unserved groups are what they say is behind the rising diversity among gun groups.

Duncan added, “We all want to be safe and if this is the way that you’re able to ensure your safety, you should definitely do it,” directing her message to other Black women.

In 2015, researchers at the Harvard Injury Control Research Center and the University of Vermont analyzed national government surveys involving more than 14,000 people. They found that guns are used for self-defense in less than 1% of all crimes when the victim is at the scene of the crime.

“The NRA and the NSSF have used fear to sell more guns to Americans for decades,” said Po Murray, the chairwoman of Newtown Action Alliance, an advocacy organization aimed at ending gun violence. “I call on my fellow Asian Americans to reject the corporate gun lobby’s attempt to exploit our fear and anxiety.”

A study by the anti-gun violence group, the Violence Policy Center, found that in 2017, there were only 298 “justifiable homicides” in the U.S. involving a private citizen using a gun, as reported by the Federal Bureau of Investigation’s Uniform Crime Reporting program.

Though Americans are carrying more guns, experts say there has yet to be research that validates owning a gun in the U.S. reduces the likelihood of crime or the crime rate.

A customer purchases a gun at Freddie Bear Sports on April 8, 2021 in Tinley Park, Ill.

It has been proven, however, that where there are more guns, there is more homicide and that “there is no net beneficial effect of firearm ownership,” according to a study in the review journal Aggression and Violent Behavior.

​In 2019, 6 out of every 10 deaths in the U.S. were firearm suicides, and about 109 people dying from a firearm-related injury each day, according to the CDC. The organization reports that almost 40,000 people died that year from firearm-related causes.

“Guns are rarely used to kill criminals or stop crimes,” said Josh Sugarmann, the executive director of the Violence Policy Center. “This is a myth essence peddled by the industry since time immemorial.”

But as more Americans purchase guns, new gun owners of color say they stick by their decision — regardless of the forces that got them there.

“Better to have it and not need it than to need it and not have it,” Clyde said.