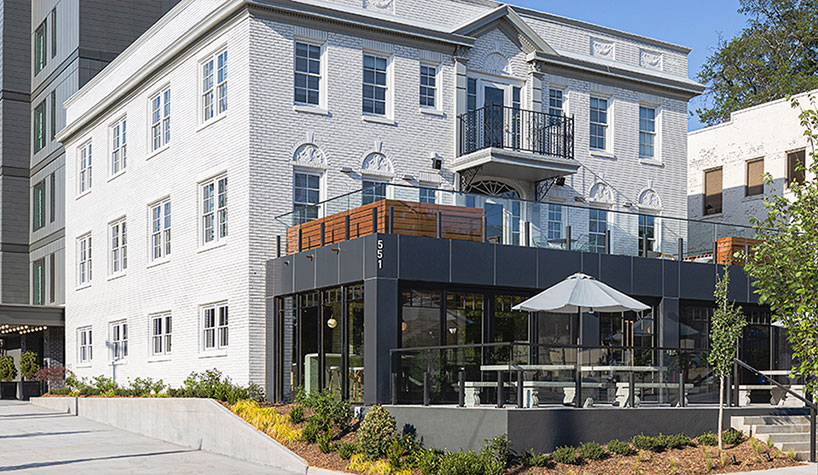 Driftwood Capital and Soul Community Planet have both acquired properties, plus CIM Group has provided a loan secured by an Atlanta property.

Driftwood Capital acquires The Wylie Hotel in Atlanta’s Old Fourth Ward
Driftwood Capital, a vertically integrated commercial real estate investment, development and lending platform specializing in hospitality, has acquired The Wylie Hotel, a brand new, 111-key boutique hotel in Atlanta’s historic Old Fourth Ward neighborhood. The property, which opened in May, is the only independent boutique hotel in Midtown’s booming office and lodging market, according to the company. Driftwood will maintain the current operator following the acquisition.

Driftwood Capital, which provides high-net-worth investors direct access to institutional-quality hotel assets through its unique syndication model, will present this offering to LP investors for syndication beginning in the fourth quarter of 2021.

Located at 551 Ponce De Leon Ave., The Wylie Hotel is the result of the revitalization and expansion of 551 Ponce, a 1920s-era hotel. The renovation of the original historic structure created a glass-enclosed sunroom on the first floor, home to the beloved Mrs. P’s Kitchen & Bar, along with a second-floor outdoor terrace and 11 restored guestrooms. A five-level addition to the rear of the historic building added another 100 guestrooms, along with administrative offices and a fitness center. Guestrooms on the fifth floor have private terraces with views of Ponce City Market, located a half a block away.

The Wylie Hotel is located in the heart of Atlanta’s Old Fourth Ward—the birthplace of Martin Luther King, Jr., and home of the iconic Ebenezer Baptist Church and the Sweet Auburn historic district. The property’s location on Ponce De Leon Ave., a major east-west thoroughfare in Midtown, gives it excellent connectivity to many of Atlanta’s other major submarkets, such as Downtown and Buckhead. Over the last decade, Midtown has rapidly urbanized, transforming into a highly desired live-work-play community with growing volumes of Class A office space, upscale hospitality, plentiful retail and diverse leisure and entertainment. The Midtown submarket is the fifth-largest office submarket in Atlanta with 27.7 million sq. ft. of office space, and it offers a high density of art and cultural institutions in the Southeast, attracting more than six million visitors annually. The property is also close to Georgia Tech, the North Avenue MARTA station and Hartsfield-Jackson International Airport.

Opened in 1948, the Laguna Riviera is located directly on the beach just two blocks south of Downtown Laguna Beach. Described as a part French Riviera and part Mediterranean retreat, the resort boasts scenic coastal views, direct access to surfing and stand up paddle boarding and features a variety of room categories, including oceanfront studios to grand one-bedroom suites, many with a full kitchen, private oceanfront decks and fireplaces.

The hotel will maintain the Laguna Riviera Beach Resort name while undergoing the planned multimillion-dollar renovation and repositioning program. The design effort, led by Kelly Ogden of ELK Collective, will infuse the hotel with SCP’s signature “Scandi-boho” design aesthetic, new landscaping and exterior and will incorporate SCP’s distinct brand features throughout. Upon completion of the renovations, the hotel will be rebranded as the SCP Laguna Beach.

SCP announced earlier this year it will become fully vegetarian across all of its venues, achieve net zero waste company-wide, and standardize all of its guestrooms on its signature “Peaceful Rooms” design by the end of 2022. These and other SCP brand services and programs are planned to be featured at the new SCP Laguna Beach. The SCP Laguna Beach is also planned to feature a signature SCP’s Provisions Market, which will offer wholesome, locally sourced, fresh, organic food and drink, including local craft beer, California wine, kombucha and coffee, along with local arts and crafts items.

CIM Group provides bridge loan secured by REVERB Hotel by Hard Rock in Downtown Atlanta
CIM Group, a community-focused real estate and infrastructure owner, operator, lender and developer, has revealed that a fund managed by an affiliate of CIM Group has closed a $43.2 million bridge loan provided to Bolton Atlanta LP to refinance the 195-room REVERB Hotel by Hard Rock, 245 parking stalls in the adjacent parking deck and a 12-story LED billboard in Downtown Atlanta.

The 12-story REVERB Hotel features technology-enhanced guestrooms, co-working spaces, soundproofed rooms for personal music sessions or recording podcasts and a designated performance area for live music, all designed in a modern, urban style. The hotel also offers specialty food and drink offerings including a café, restaurant and a rooftop bar with unparalleled views of the Atlanta skyline. Will James of Colliers arranged the financing for the borrower.

Call of Duty: Vanguard’s Graphics Are So Real, Actual War Journalists Went Inside the Game Engine to Capture Photographs of It