The Pandemic Splintered the American Dream Into Four Versions 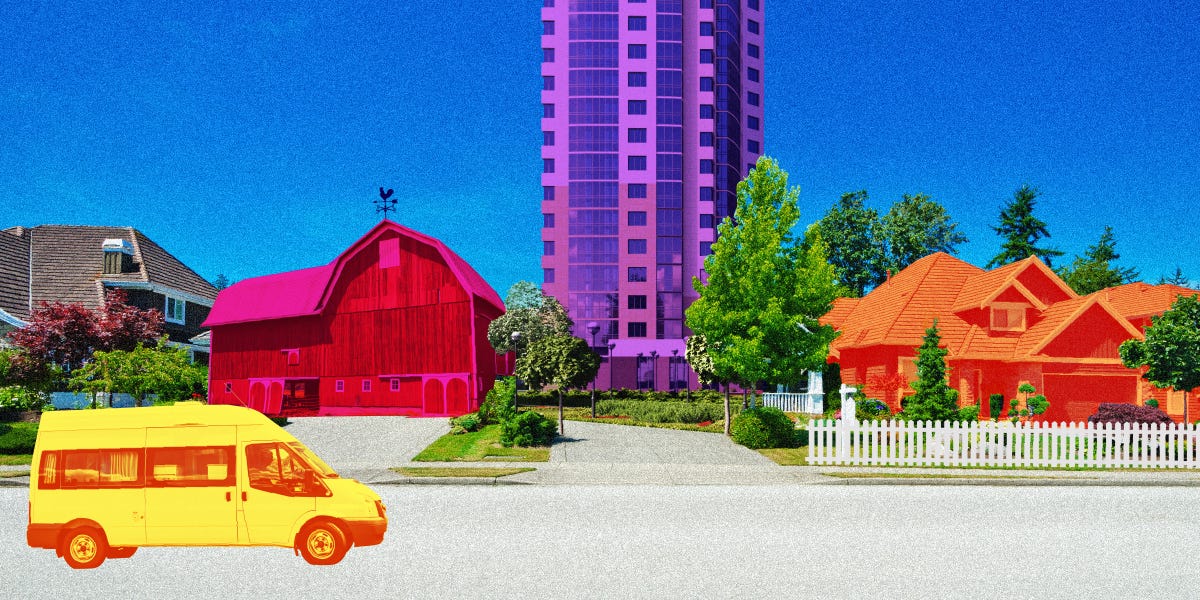 The 27-year-old product manager began house-hunting in October 2020 after she moved from the Bay Area back to her South Florida hometown during the pandemic. She’d been bouncing between the two coasts until her workplace reclassified her as a Florida employee and she began enjoying the tax perks of the Sunshine State, inspiring her to invest in a house.

After going into contract the first time, the seller ghosted her. The second one forced her out and threatened her escrow funds. “I can write a book on all the horrors of first-time home buying,” she told me.

Nader is looking for the “good life” that many Americans have been seeking since the 1950s, when the US emerged as an economic superpower and a house, yard, and white picket fence emerged as the ideal lifestyle.

This 20th-century fantasy has had a lot of ups and downs in the 21st. First, the dream of homeownership curdled for millions during the Great

. And then, after a long and slow economic recovery, the pandemic untethered people from the city and the office, providing workers with freedom and flexibility to chase the dream again. But this boom morphed into a historic housing shortage that has boxed many aspiring first-time homeowners out of the market.

In hopes of upping her homebuying odds, Nader expanded her search from Florida to Colorado, North Carolina, Washington, and California. She said she put in offers without even seeing some of the houses in person. “That’s how competitive the market is.”

Larry Samuel, the founder of Age Friendly Consulting and author of “The American Dream: A Cultural History” told me that homeownership was never what the American Dream was about anyway.

“While considerable numbers of folks are still convinced that having the proverbial white picket fence will signify they’ve achieved the American Dream, many others are realizing there are other perfectly valid interpretations of the concept,” he said.

A healthy 59% of Americans still aspire to be homeowners, a sign of the lingering allure of the post-World War II vision. But in 2021, it turns out that instead of one alluring dream of a better kind of life, Americans now have four of them.

Version 1: An exclusive suburbia for those with postwar dreams

Suburbia became a pandemic-era utopia, as outdoor access and spacious rooms for remote work appealed to a locked-down nation. But the number of Americans snapping up their piece of the pie proved no match for a market that had been underbuilding since the Great Recession. America began running out of houses.

The suburbs became ground zero for bidding wars as competition sizzled. Boomers with equity and wealthier millennials emerged victorious with all-cash offers. The losers were often everyday millennials, like Nader, for whom a second housing crisis was just the latest in a long line of economic bad luck.

Nader said she originally wanted to buy a house under $400,000 so she could pay it off quickly and “actually own it,” but the lack of starter homes caused her to up her budget by $200,000. “It’s really a cash buyer market,” she said. “If you have the cash, you can buy whatever you want right now.”


Alyssia Cinami thought she’d have more cash to house-hunt after paying off her student loans. The licensed family therapist has been looking in northeast Connecticut for the past 14 months. She says the “insane” market has left her exhausted and discouraged as a first-time buyer. Over the course of five bids, she increased her original maximum budget of $260,000 by $20,000, and even added an additional $20,000 to some bids.

“Looking for a house is like another part-time job,” she told me.

The suburbs are now mostly attainable for the wealthy, becoming less accessible to the 68% of millennials who have their sights set on homeownership. That’s created other versions of the house with the picket fence, somewhere farther out or farther in.

Cinami is hoping to buy her starter home in Woodstock, Connecticut, a relatively rural town offering privacy, good schools, and safety. It’s a good example of the rural idyll that some have embraced because of remote work, a trend that encompasses the “exurb,” a rural community that is distantly commutable to a big city.

Americans moving from urban areas to the exurbs marked the biggest population shift in the pandemic, Jefferies analysts said in an August note, citing USPS mail-forwarding data. In May through June, 40,000 Americans exited cities and suburbs for the exurbs. While pandemic population shifts have been waning, exurbs and rural areas were the only regions to add households in those months.

Urbanist Richard Florida told me that the rural fringe has seen a “real, new growth spurt” as the pandemic opened up rural areas that bridge to existing metros, like the Hudson to New York City. Driving the trend is what Florida has long called the creative class.


As he explains it, this cohort of young knowledge workers once sought a “real authentic, urban experience” in big cities, but as big box and chain stores moved in, many of those experiences have disappeared. Now, they’re finding that authenticity in the rural fringe. It’s become an endpoint for a new type of American Dream.

“The new picket fence is a farm,” Florida said.

To solve the housing shortage, builders should focus on these areas, Ali Wolf, chief economist at homebuilding prop tech company Zonda, told Insider. They should “move further to the outskirts, or start additional building in parts of the country with more developable land,” she said. As homes are built farther from downtown, she added, amenities will likely improve, creating new gathering places and hotspots.

Version 3: Reviving cities as places of connection, not work

For all the migration to the suburbs and exurbs, cities are not dead.

Bank of America Research said the narrative of an urban exodus was more myth than reality, and a Zillow report found that of people who moved, 19% moved within their metro area, and nearly 40% stayed in the same city but switched neighborhoods. Consider NYC, where USPS data found that more Manhattanites moved to Brooklyn than anywhere else between March 2020 and February 2021.

In fact, rents are skyrocketing and 60% of wealthy millennials plan to buy a home in a big city within the next year.

As prominent economist Enrico Moretti recently told Bloomberg, remote work gave urbanites the freedom to live in the part of the metro area they’d rather be in while still reaping the fun of city life. So really, when zooming out to consider the whole metro area, these thriving urban cities just got larger.

People who live in cities live there because they want to, not for work.


What the pandemic did, Florida explained, was accentuate a demographic divide among urbanites by accelerating pre-pandemic behaviors: young families headed to the ‘burbs as cities became less attractive to them, while starry-eyed young professionals flocked back as soon as they could, continuing a trend that began in the 2010s. Plus, some pre-pandemic homeowners who profited from the housing boom, can now afford to trade their small-town digs for city living.

That means many city residents today are living there because they want to, not because they need to for work. It’s ushered in a new era for cities, one no longer centered around an office but instead on personal interaction that facilitates spontaneity and creativity.

“I think we’ve mistaken cities as containers for people to work,” Florida said. “That’s not what cities are. Cities are connectivity machines with new generations of connections and meeting spaces.”

Version 4: A lifestyle on the go

Finally, not everyone wants to stay put. Alternative lifestyles that flourished during the past decade, like #vanlife and digital nomads, boomed during the pandemic.

More Americans also decided to try out life on the road. Makers of camper vans, RVs, and travel trailers have been updating on existing builds or creating new floor plans to accommodate the growing market. Van sales for Mercedes-Benz US increased by 22.5% in 2020, even as the brand’s overall sales fell by 8.9%.

Alternative living boomed during the pandemic.


Khanna, a globalization expert and author of “Move: The Forces Uprooting Us,” said he’s seen elevated youth mobility during remote work. “The picket fence is, ‘Hey, look at my view, when I’m in Seattle,’ and ‘look at the one where I’m in Boise,’ or ‘I’ve got my tiny home and now I’m in Tahoe,'” he said.

The demographics fueling these trends sit at two different ends of the spectrum. Some buyers are digital nomads, with the means and desire to live a more mobile lifestyle. This growing movement is hopping from locale to locale for extended periods of time, giving rise to the “workcation,” in which people move to some of the world’s most remote places and turn Airbnbs into office spaces.

For others, the upfront cost of a van or a tiny house is a more affordable alternative to the housing crisis. “Even before the current housing crisis, many millennials were bypassing debt-based home ownership in order to pursue a more present-focused, mobile lifestyle,” Samuel, the generational consultant, said. “Given the cost of buying a home, that lifestyle has gained even greater cultural currency, further eroding the postwar version of the American Dream.”