Tel Aviv: poverty and eviction in the world’s most expensive city | Israel

In one of Tel Aviv’s most affluent neighbourhoods, a collection of ramshackle one-storey homes with rusting roofs known as Givat Amal Bet still sits in the shadow of the high-rise towers looming above.

Israel’s economic centre has recently been named the world’s most expensive city to live in, overtaking Paris and Singapore in the 2021 rankings compiled by the Economist Intelligence Unit (EIU). As the Mediterranean city’s reputation as a global tech hub continues to attract foreign investment, however, and prices for goods and services soar as Israel’s economy makes a strong recovery from the pandemic, locals fear the widening gap between rich and poor is pushing out working-class residents and creating damaging new social divisions.

Tel Aviv’s status as the world’s most expensive metropolis, up from fifth last year, is in large part a result of global inflation and supply chain issues caused by Covid-19 shutdowns. The shekel has gone from strength to strength thanks to the weakened dollar, Israel’s large current account surplus, and foreign direct investment in the tech sector that is expected to reach $30bn (£22.7bn) by the end of the year.

Givat Amal Bet is the starkest example of the area’s changing demographics. During the 1947-48 war surrounding the creation of the Israeli state, the residents of the Palestinian village of al-Jammasin al-Gharbi, which once stood there, fled to avoid the fighting. Newly arrived Jewish refugees and migrants from around the Middle East and north Africa, known as mizrahim, were asked to settle in their place as a buffer against the Arab armies.

The displaced Palestinians were later denied the right to return, so the mizrahim stayed and named their new home Givat Amal Bet. Unlike other villages that were absorbed into the municipality as Tel Aviv grew, however, the 40 or so working-class families living there were never allowed to purchase the land on which their homes were built. Despite paying city taxes, they have had irregular access to services such as water and electricity.

The community is still fighting a decades-long legal battle for compensation with development companies, the state and the Tel Aviv municipality, but the last of the neighbourhood’s residents were forcibly evicted from their homes last month.

“When my parents came from Damascus we were asked to settle here to help the state,” said Yossi Cohen, 68, who in November was dragged by police out of the house in which he was born. Israel’s first prime minister, David Ben-Gurion, had “promised that we would be rewarded, that we would keep our homes”, he said. But during the eviction, most of the contents of his house were dumped outside, and a fence now stops anyone from going in.

“We have fought discrimination from the Ashkenazi [Jews of European heritage] our whole lives. We live on some of the most expensive land in Tel Aviv, so they try force us off, the same way they do with the Arabs.” 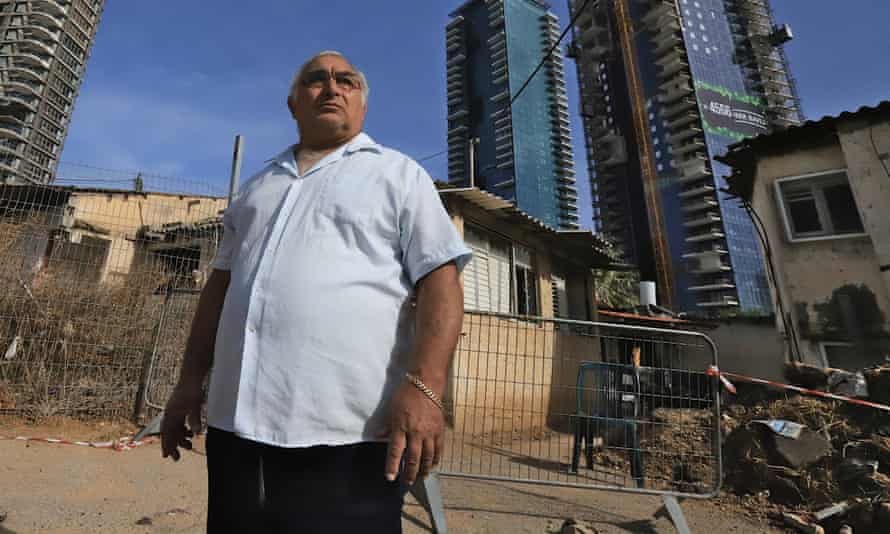 Two high-rise towers have been built on the edge of Givat Amal Bet since 2005. Three more are planned to meet the demand for office space and luxury apartments.

The EIU’s assessment of Tel Aviv’s affordability doesn’t even factor in surging local property prices and the shortage of purchasable land, said Asaf Mualem, the owner of the real estate company Menivim Israel. “In the last two years our prices have become double what you see on shows like Selling Sunset in Los Angeles. We are talking 65,000 shekels [£16,000] per square metre,” he said.

The foreign investment is coming from the tech sector, the Jewish diaspora in France and the US and a new influx of money from the UAE, Mualem said: the wealthy Gulf state, along with Bahrain, Morocco and Sudan, signed US-brokered peace agreements with Israel in 2020.

‘Even rich local people are getting priced out, and it’s not going to stop. I think prices will go up another 30% before the bubble bursts,” he said.

Gentrification is a problem in cities across the world, but Israel’s recent political paralysis has compounded Tel Aviv’s housing crisis. No public housing has been built in the last two years, even though 30,000 people are on waiting lists.

“Israel was founded as a socialist state, but we have abandoned those principles. I do more of a job finding vulnerable people places to live than the entire housing ministry,” said local activist, Riki Kohan Benlulu.

“They started selling off public housing in the 80s, which is when the gap started growing. Safety nets are the price of civilisation. Now it’s like going to hospital, but instead of giving you medicine, they make you sick.”

Standing outside his former home in Givat Amal Bet, Cohen was not sure what the future holds for the neighbourhood or the residents’ association’s battle for compensation.

“We have a saying in Hebrew, we talk about a land that eats its inhabitants. Well, the ones up there, they’re the ones who feed on us,” he said, pointing at the tower developments.