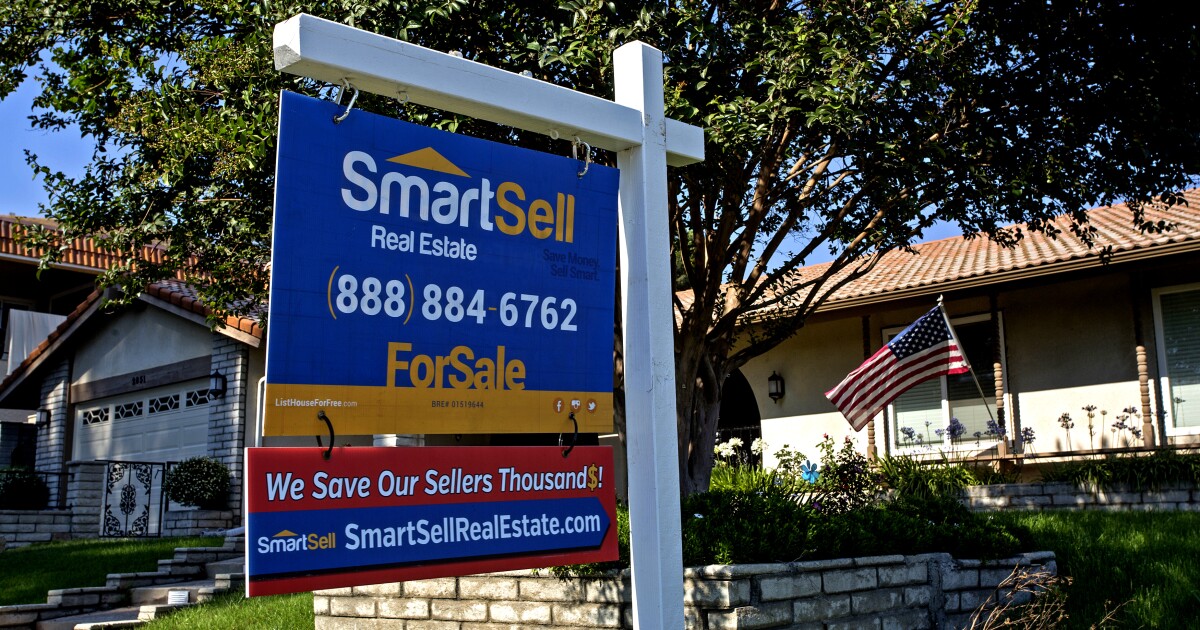 Southern California home prices jumped nearly 16% in November from a year earlier, showing how the market is still ultra-competitive despite a slight slowdown that began to set in several months ago.

Some buyers sat out the bidding wars after a particularly frenzied period last spring, but plenty of shoppers stayed the course, driving prices up to successive new records in recent months.

The region’s six-county median sales price reached an all-time high of $693,500 in November, according to data released Thursday by real estate firm DQNews. That’s 0.5% higher than in the previous month, October, and 15.6% higher than in November 2020. Sales rose 1.8% from that year-earlier period.

Some economists expect home price appreciation will slow to single digits next year, in part because they expect mortgage rates will rise. That could be more likely to happen after the Federal Reserve on Wednesday announced more aggressive plans to fight inflation, but for now average mortgage interest rates remain in the low 3% range.

In addition to historically low borrowing costs, several other factors continue to fuel today’s competitive market with fast-rising prices. More millennials want to become first-time buyers, and investors are increasingly buying homes to rent or flip. In addition, many white-collar workers did well financially during the pandemic and put some of their booming stock portfolios into down payments.

Squeezing the market is the supply of homes for sale, which is at record lows. That has potential buyers one-upping one another in bidding wars that cause homes to sell for tens, even hundreds of thousands of dollars over list price.

The sharp price increases are pushing some people to leave their communities to afford a home, moving from Los Angeles to San Bernardino and from San Bernardino out of state altogether, to places such as Arizona.

In November, the biggest price rises from a year earlier were in the Southland’s less-expensive counties of Riverside and San Bernardino, which each hit new median home price records.

In Los Angeles and Orange counties, November home prices hovered below the record levels reached, respectively, in September and October, but they were significantly higher than in November 2020.

Many economists and housing policy experts say Southern California, and the nation as a whole, must build far more homes — both market rate and subsidized — if owning and renting are to be more affordable. But developers say restrictive building and zoning rules, particularly in California, have long limited their ability to meet demand, and lately, supply chain issues have delayed some projects even more.

Whether relief for buyers is on the horizon remains to be seen.

In recent months, the market has cooled somewhat, with real estate agents reporting bidding wars are less intense but still common. Competition for homes typically wanes in fall and winter, so it’s difficult to know how much of the slowdown is the result of normal seasonal patterns versus a market that will be better for buyers in the long run.

Selma Hepp, an economist at CoreLogic, said she expected more of a slowdown in sales by now, noting that transactions usually fall between October and November but dropped less this year than normal.

The annual median price increase for all of Southern California, 15.6%, is lower than the 20% rise that was common in months earlier this year, but it’s also a few percentage points higher than a recent low of 12.6% in September.

This slight acceleration of year-over-year price increases the last two months could indicate a pickup in price appreciation is underway, but Hepp said she doesn’t believe that’s the case. The pickup is probably due to more luxury homes selling, therefore pushing the median value slightly higher, rather than a true price acceleration, she said.

A CoreLogic index that aims for a more accurate — if delayed — view of prices than the median shows a slowdown has started, though barely. According to that index, L.A. County prices rose 14.1% in November from a year earlier, compared with a 14.9% year-over-year gain in August.

For now, here’s a county-by-county breakdown of home prices and sales in November compared with a year earlier, as tracked by DQNews.