Newmark announced earlier this month the hiring of Mike Smith, who next month will become an executive VP. He makes the move from Cushman & Wakefield, and has three decades of experience in the field. Newmark’s Kevin McCabe said in a statement, “Mike has a proven track record in managing large commercial real estate services teams, with an eye on improving processes and integrating service offerings.” Smith said, “I’m excited to become part of this leading organization within the high-growth core U.S. market that is the Northwest.” He’ll work closely with Chuck Seufferlein in his new role. Newmark also said that Michael Sheinkop will shift out of the local market by year’s end, in order to focus on broader corporate matters.

The DJC previously reported the Amazon-backed acquisition of 212 affordable units at the Marina Club, in Des Moines, and The BLVD in Kent. The buyer was Bellwether Housing, which also had loans from Citibank. Now JLL has announced its role in the two deals. Its C.W. Early and Martine Combal worked with executives at the $2 billion Amazon Housing Equity Fund to structure $24.8 million for the acquisition and rehabilitation of both properties. JLL says the loans are 20-year, fixed-rate instruments. Early said, “JLL is so excited and humbled to be involved in such an amazing program. Amazon has created a platform to preserve, create and improve projects, all while adding very long-term affordability to a market that is sorely in need due to rising rents and high demand.” Bellwether’s Susan Boyd said, “As we were preparing our hunt for low-cost capital, Amazon announced its fund. We anticipate this tool will allow us to bring hundreds more units into permanent affordability.” Amazon’s Catherine Buell directs the fund, and said, “We are so pleased to be a part of the solution by addressing the affordable housing shortage.”

Anchor Health Properties entered our market two years ago, with investments in Silverdale and Bothell. This June it put down $323 million for another property in Renton. Now the private investor and developer, based in Virginia, has announced the recent hiring of Dave Baker. He’ll be based in Seattle, with the title of senior VP of development. He makes the move from Health Facility Advisors, of Colorado. Anchor’s Katie Jacoby said in a statement, “His depth of experience and long-held relationships complement and enhance our platform at a time when providers and health systems are focused on deriving the greatest value from their physical space.” Baker added, “I am looking forward to forging and expanding relationships while growing our nationwide portfolio as we broaden our influence in this exciting sector.” Anchor manages about 7 million square feet, and has developed 3 million square feet.

You won’t be eating at 660 S. Industrial Way, but that’s where the very popular pizzeria Tutta Bella will make its new headquarters next year. It’ll also have a custom-built production facility in the building, owner Nitze-Stagen just announced. The latter’s Daniel Gallagher said in a statement, “We are proud to invest in Tutta Bella’s growth by building a state-of-the-art prep kitchen, production facility and office space. We are excited to welcome Tutta Bella to the neighborhood.” (BuildingWork is designing the new space.) The new tenant will take a little more than half the space, with about 15,000 square feet, in a building that Nitze-Stagen purchased two years ago for nearly $8 million. Tutta Bella will there make all its grocery and retail products. Its founder Joe Fugere said, “The signing of our new production facility is very exciting, and it marks a very big step in our mission to scale Italian artisanal food and provide people the opportunity to enjoy a true premium restaurant meal experience at home.” 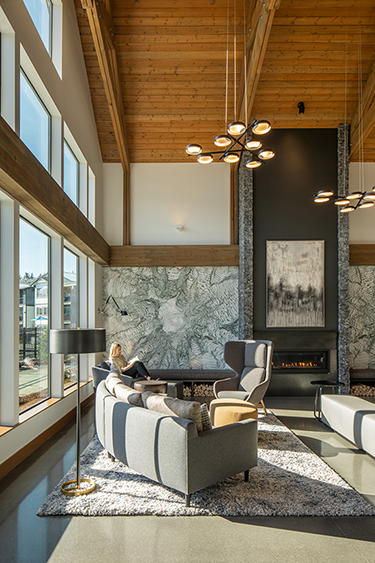 Recently completed south of Puyallup, the 144-unit Glacier Run Phase II has received a refinancing package worth nearly $27.6 million. NorthMarq arranged the Fannie Mae loan, and announced the deal. Its Bob Spiro and Scott Moline led the effort. Two years ago, the same duo arranged an over $37 million refinancing of the recently completed Phase I, with about 240 units. Spiro explained, “We were able to provide competitively priced financing for Phase II with Fannie Mae, and we were able to structure the loan so that the prepayment period matched with the Fannie Mae loan on Phase I.” The new loan carries a 10-year term with a 30-year amortization schedule, said NorthMarq. Tarragon is the borrower, builder and developer. Milbrandt Architects designed the project, which is in south Pierce County, east of Frederickson and near Pierce County Airport (aka Thun Field).

Totaling up some previously reported leasing news, Bridge Industrial announced five notable leases that contribute to about 1.1 million square feet leased at multiple industrial properties. Amazon itself had already announced its 510,000-square-foot logistics center at Bridge Point Lacey, which Bridge sold last year for $83 million; it was then about 90% vacant, before Amazon signed. Also at the 705,590-square-foot Lacey complex, Bridge has now confirmed tenants Mud Bay and Morgan Transfer Moving and Storage Services. And at Bridge Point Sumner South, Grape Expectations signed for the entire building, with 82,678 square feet. And down at Bridge Point I-5 Portland, an unnamed logistics company took 438,051 square feet. Bridge’s Justin Carlucci said in a statement, “We’ve been successful in providing modern, state-of-the-art and strategically-located assets that cut down on users’ transport and operational costs to serve this booming market.”

Family run Ayres Hotels, of Southern California, announced its recent acquisition of the 105-room Olympic Lodge in Port Angeles. Terms were not disclosed. It’s the company’s first buy outside its home state. Chase Ayres said in a statement, “Our family was immediately taken by the natural beauty of Port Angeles and the warmth of its people. The Olympic Lodge is a high-quality property with many attributes that fit perfectly in our collection of accommodations.” The investment brings the company’s portfolio to 24 destinations. The lodge has meeting rooms, a business center, a 24-hour gym, heated outdoor pool and hot tub. Parent company Ayres Group was founded in 1905 as a developer; the company is now in its fifth generation of leadership. It also has a building arm.

King County Council Chair Claudia Balducci (Dist. 6) awarded Kirkland resident Kurt Triplett with the Martin Luther King Medal of Distinguished Service, an award that recognizes individuals whose work has answered the question asked by Dr. Martin Luther King, Jr. “What are you doing for others?” Triplett has dedicated his life to public service across King County. For the last 11 years, he has served as city manager for Kirkland where, in 2020, the community found itself in the national spotlight as the first epicenter of COVID-19 in the United States. Triplett previously worked for King County for 17 years, including serving as the interim county executive in 2009, chief of staff to Executive Ron Sims, deputy director of natural resources and parks, and deputy chief of staff for Executive Sims and former Executive Gary Locke. He currently serves on the board for A Regional Coalition for Housing. He is also chair of the Eastside Public Safety Communications Agency, as well as a joint board member for the Puget Sound Emergency Radio Network.

Kirkland-based CLIPr, a Video Analysis and Management (VAM) platform using AI and machine learning to index video content, hired Durk Stelter as chief revenue officer. Stelter will lead sales, services and marketing teams and be responsible for all revenue-generating activities, as well as operationalize CLIPr’s vision and strategy to accelerate growth. Stelter brings over 30 years of experience across telecommunication and artificial intelligence industries. He was CRO of Linc Global, an AI-driven customer experience automation platform. Prior to that, he was the CRO for Pypestream. Stelter received his Bachelor of Science in Technical Management from the University of California, Davis.