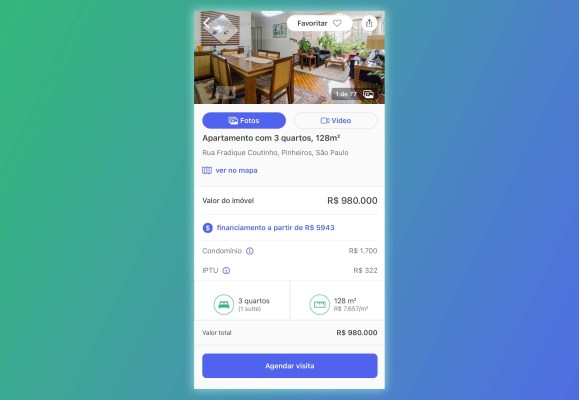 New investors Greenoaks Capital and China’s Tencent co-led the round, which included participation from some existing backers as well. São Paulo-based QuintoAndar is now valued at $5.1 billion, up from $4 billion at the time of its last raise in late May. With the extension, the startup has now raised more than $700 million since its 2013 inception. Ribbit Capital led the first tranche of its Series E.

QuintoAndar describes itself as an “end-to-end solution for long-term rentals” that, among other things, connects potential tenants to landlords and vice versa. Last year, it also expanded into connecting home buyers to sellers. Its long-term plan is to ​​evolve into a one-stop real estate shop that also offers mortgage, title insurance and escrow services.

To that end, earlier this month, the startup acquired Atta Franchising, a 7-year-old São Paulo-based independent real estate mortgage broker. Specifically, acquiring Atta is designed speed up its ability to offer mortgage services to its users. QuintoAndar also plans to explore the possibility of offering a product to perform standalone transactions outside of its marketplace in partnership with other brokers, according to CEO and co-founder Gabriel Braga.

This year, QuintoAndar expanded operations into 14 new cities in Brazil. Eventually, QuintoAndar plans to enter the Mexican market as its first expansion outside of its home country but it has not yet set a date for that step. Today, the company has more than 120,000 rentals under management and about 10,000 new rentals per month. Its rental platform is live in 40 cities across Brazil, while its home-buying marketplace is live in four (Sao Paulo, Rio de Janeiro, Belo Horizonte and Porto Alegre) and seeing more than 10,000 sales in annualized terms.

QuintoAndar, he said, is open to acquiring more companies that it believes can either help it accelerate in a particular way or add something it had not yet thought about.

“We’re receptive to the idea but our core strategy is to focus on organic growth and our own innovation and accelerate that,” Braga said.

Why raise more money so soon?

The Series E was oversubscribed with investors who got in and “some who could not join,” according to Braga.

Greenoaks and Tencent, he said, couldn’t participate because of “timing issues.”

“We kept talking and they came back to us after the round, and wanted to be involved so we found a way to have them on board,” Braga said. “We did not need the money. But we have been constantly overachieving on the forecast that we shared with our investors. And that’s part of the reason why we had this extension.”

Greenoaks’ long-term time horizon was appealing because the firm’s investment was designed to be “perpetual capital with no predefined timeframe,” Braga said.

“We’re doing our best to build an enduring company that will be around for many, many years, so it’s good to have investors who share that vision and are technically aligned,” he added.

Greenoaks Partner Neil Shah said his firm believes that what QuintoAndar is building will “fundamentally reshape real estate transactions, enhancing transparency, expanding options for Brazilians seeking housing, dramatically simplifying the experience for landlords and driving increased investment into real estate across the country.” He also believes there is big potential for the company to take its offering to other parts of Latin America.

“We look forward to being partners for decades to come,” he added.

Tencent’s experience in China is something QuintoAndar also finds valuable.

“We believe we can learn a lot from them and other Chinese companies doing interesting stuff there,” Braga said.

QuintoAndar isn’t the only Brazilian prop tech firm raising big money: In March, São Paulo digital real estate platform Loft announced it had closed on $425 million in Series D funding led by New York-based D1 Capital Partners. Then, about one month later, it revealed a $100 million extension that valued the company at $2.9 billion.