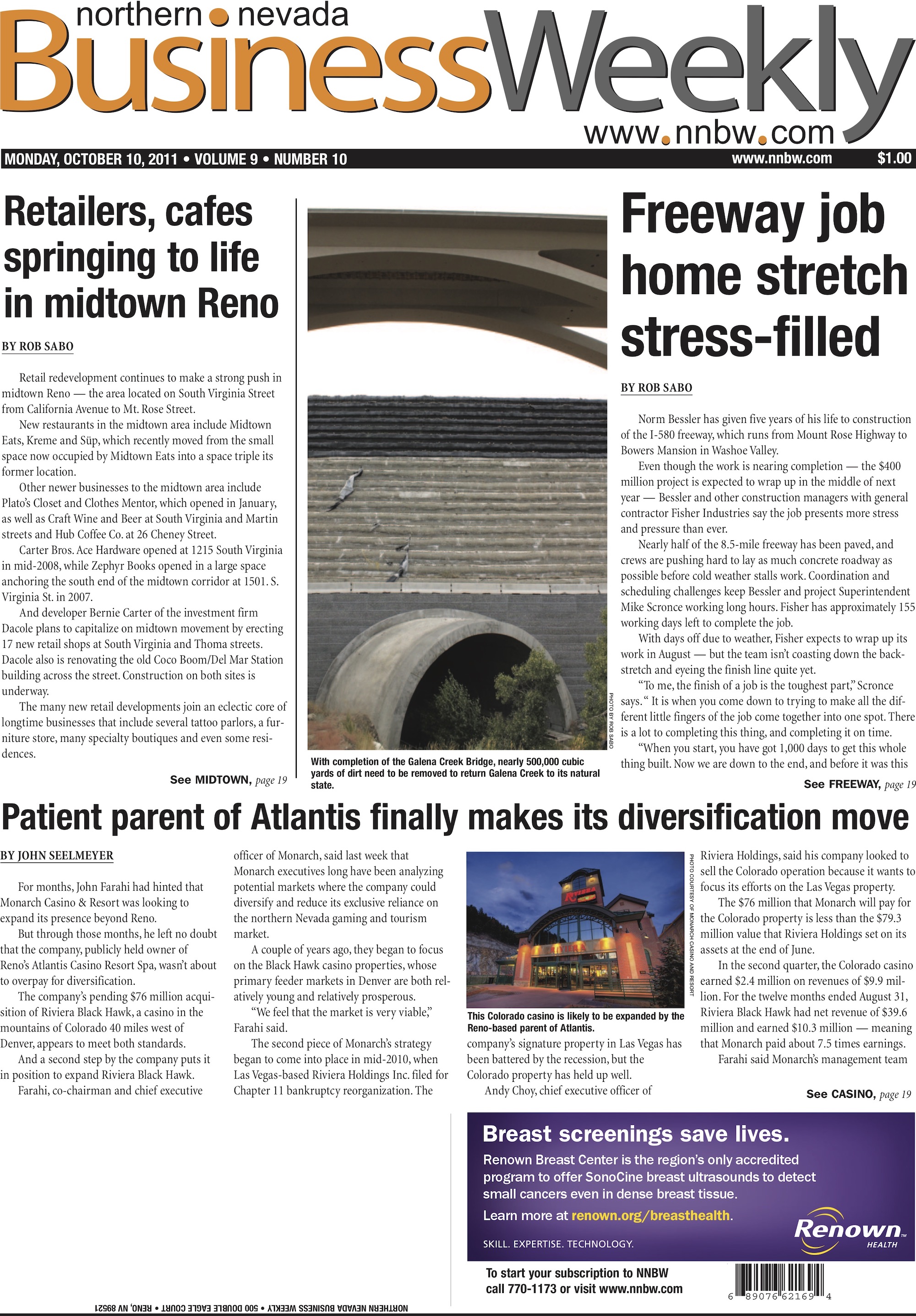 EDITOR’S NOTE: Each week, we feature snippets of stories that published a decade ago to provide readers a 10-year perspective of business news in the region. This week’s stories first published in the Oct. 10, 2011, edition of the NNBW.
Retailers, cafés springing to life in Midtown Reno

Retail redevelopment continues to make a strong push in Midtown Reno. New restaurants in the area include Midtown Eats, Kreme and Süp, which recently moved from the small space now occupied by Midtown Eats into a space triple its former location.

Other newer businesses include Plato’s Closet and Clothes Mentor, which opened in January, as well as Craft Wine and Beer at South Virginia and Martin streets and Hub Coffee Co. at 26 Cheney St.

Carter Bros. Ace Hardware opened at 1215 South Virginia in mid-2008, while Zephyr Books opened in a large space anchoring the south end of the Midtown corridor at 1501. S. Virginia St. in 2007.

Developer Bernie Carter of the investment firm Dacole plans to capitalize on midtown movement by erecting 17 new retail shops at South Virginia and Thoma streets. Dacole also is renovating the old Coco Boom/Del Mar Station building across the street. The many new developments join an eclectic core of longtime businesses that include several tattoo parlors, a furniture store, many specialty boutiques and even some residences.

For months, John Farahi had hinted that Monarch Casino & Resort was looking to expand its presence beyond Reno. But through those months, he left no doubt that the company, the publicly held owner of Reno’s Atlantis Casino Resort Spa, wasn’t about to overpay for diversification.

The company’s pending $76 million acquisition of Riviera Black Hawk, a casino in the mountains of Colorado 40 miles west of Denver, appears to meet both standards. And a second step by the company puts it in position to expand Riviera Black Hawk.

Farahi, co-chairman and CEO of Monarch, said last week Monarch executives long have been analyzing potential markets where the company could diversify and reduce its exclusive reliance on the Northern Nevada gaming and tourism market.

The buyer of a failed condo-conversion project in North Reno doesn’t expect to resume selling units in the 153-unit Talus Point complex for several years — and maybe more. Sycamore Urban Properties, an Irvine, Calif., company formed in 2008 to purchase distressed properties, ultimately expects Talus Point will come back onto the market as condominiums.

The complex at 3970 Covington Way was acquired by Sycamore from U.S. Bank for $4.225 million. A California company bought the property for about $11 million in 2004 and started a condo-conversion process before the real estate market collapsed.

Today, 28 units are owned as condos and the other 125 are leased. The original lender, California’s PFF Bank and Trust, foreclosed in 2009, and U.S. Bank ended up with the property.