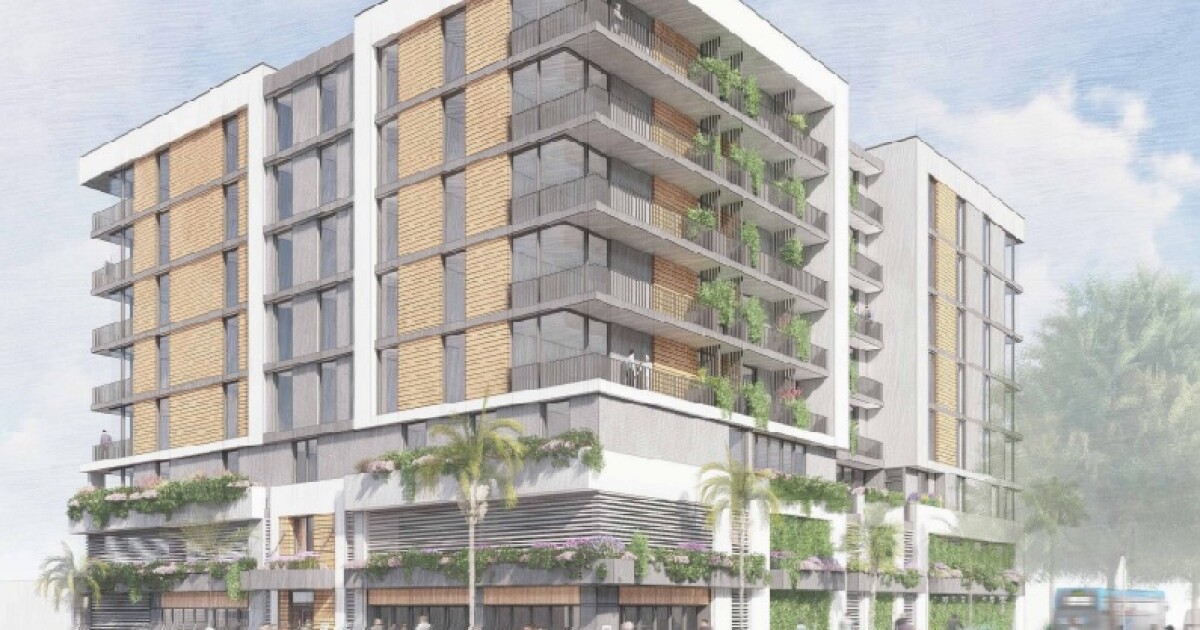 A proposed eight-story building that will house a hotel, studio apartments and commercial space has some Oceanside residents fighting what they call the Seagaze Tower.

The site for the structure is a closed, gated parking lot of slightly more than one-third acre at Seagaze Drive and Nevada Street, a half-block south of Mission Avenue and two blocks west of Oceanside High School. The top two floors would be a 64-room hotel, and the first floor would be the hotel lobby, leasing offices and a small cafe.

The building would have 115 apartments of about 300 square feet each, with 103 to be rented at market rates and 12 reserved for low-income occupants. Five levels of parking in the building, including two below ground, would accommodate 146 spaces.

“Too tall, too dense and inadequate parking,” said Barbara Stefl, who lives nearby on Nevada Street, in a letter to the city’s Planning Department. “Reduce floors to six to make it similar to other structures. Remove hotel rooms, which are already plentiful in Oceanside. Build sufficient parking to minimize overflow into the neighborhood.”

City staffers are recommending approval of the project, which could go to the Oceanside City Council for consideration by the end of January.

“This is an appropriate type of development and use for the site,” Principal Planner Richard Greenbauer said last week in a presentation to the city’s Community Advisory Committee. “It is consistent with the overall redevelopment of our downtown core area.”

The project conforms to existing zoning and the city’s General Plan, but the applicant has requested eight waivers of city requirements for things such as setbacks, parking space dimensions, landscaping and the building’s height.

State law requires the city to grant those waivers as what’s called a “density bonus,” because the project includes apartments reserved for low-income residents. The state encourages the construction of high-density, mixed-use projects in areas like the Seagaze site, which is near other multistory buildings, public transportation and other services.

The applicant for the project is Elsey Holdings, LLC, a Manhattan, Kan., company led by twin brothers Chris and Bryan Elsey that specializes in college dorms and similar high-density developments.

“We like to call it workforce housing,” Bryan Elsey said Friday by telephone from Kansas. “When you are building workforce housing, these projects look like luxury housing, but you are doing something in the design to get a better price point.”

Small spaces are a compromise people make so they can afford to live near restaurants, entertainment and workplaces and, in Oceanside, the beach, he said.

“People want to live in those areas, but they are priced out of it,” Elsey said. “That’s the kind of market we are trying to serve.”

Advisory committee members acknowledged that, despite residents’ concerns, there’s little the city can do about the building’s height or density, but raised other issues. Member Richard Wright noted that a narrow alley provides the only access to the parking garage used by apartment residents and hotel guests.

“I don’t think that is going to work,” said Wright, who owns a downtown business. “That alley gets blocked all the time by trucks stopped for delivery. There’s no room for two cars (to pass). … I can’t imagine how it would accommodate that many trips.”

He called the alley access “a grave mistake” and “a deal-breaker,” and said he could not support the project.

Elsey said he was surprised by the comments on the alley, but it’s something the company can work on, and “there might have been some oversight there.”

“There is usually an engineering solution you can find,” he said.

Committee Chair Claudia Troisi said she had “strong concerns” about placing the hotel on the top two floors because the elevators, parking facilities and common areas including the swimming pool would be shared by hotel guests and apartment residents.

“With people coming and going all the time, I don’t find that a particularly good thing,” she said, and long-term residents are likely to complain about all the activity. She suggested a separate elevator for the hotel.

Narrow parking spaces and aisles in the garage can be “scary” for drivers, and people will want to avoid the structure by parking on the street, Troisi said. That would compound neighborhood parking problems. Also, if the landlord charges tenants extra for parking, that will increase the tendency to park outside the structure.

The committee voted 5-2, with Wright and Drew Andrioff opposed and two members absent, to forward the project to the City Council for approval, but added several requests.

The panel recommended the developer prohibit short-term rental of the apartments, perhaps by a stipulation in the lease agreements. It also asked that parking be included as part of every lease agreement and not as something renters pay extra for, and it requested a further analysis of the alley access.

Committee member Scott Ashton supported the project and said the apartments would help house the many people who work downtown in the hospitality industry.

Most of the letters the city has received so far oppose the project.

“This development is inappropriate for our downtown,” wrote Joseph T. Gallagher, a 40-year resident who has volunteered on a number of city commissions.

“This eyesore of a project will be eight stories above ground with insufficient parking and could mark the beginning of a perilous future for development in downtown Oceanside,” Gallagher said. “The height, proposed design, occupancy, and inadequate parking make this a future blight on the prospering downtown area.”

Other letter writers and some of the commissioners questioned the need for another hotel. Two large beach resorts opened this year near the pier, and other hotels have opened recently or plan to open soon.

Officially known as the 712 Seagaze project, for the address of the property, the design is a reworked version of a luxury condominium project presented to the city in 2018.

Previously called Seagaze 16, the proposal by Rancho Santa Fe developer Archipelago called for six stories with a total of 16 condominiums. The ground level was to be six live-work units with 17-foot ceilings and walls of folding glass. The upper five floors were to have two residences per floor, each with a large outdoor deck for entertaining.

Elsey’s company bought the property about a year ago, he said.

At eight stories, the building would be the second-tallest in Oceanside, exceeded only by the 17-story Marina Towers built in 1976 at the harbor. Several downtown hotel and condo buildings are six and seven stories tall, including two hotels that opened this year near the municipal pier.

The Elseys were not present at Monday’s meeting but watched the meeting online. The applicant was represented by Kelly Kanaster of the Lightfoot Planning Group in Carlsbad.

The Elseys are founders of The Prime Co., a real estate investment company that would design, build and manage the Oceanside building.

A video appeal to investors posted on the company’s website promises a 10 percent return on investments and says the company will give away 90 percent of its profits “for the sake of the gospel” by 2040.

“The (Oceanside) studios will be marketed to young professionals, singles, and military personnel wanting a beach town experience,” states the developer’s website, which lists the Seagaze project as an investment opportunity.

No hotel is mentioned, and the webpage says the eight-story building will have 179 studio apartments. Discrepancies such as that are not unusual as developments evolve in the process of planning.

The Elsey brothers recently were approved to build a five-story, high-density dorm building at San Diego State University, and Bryan Elsey said Friday they are obtaining permits to start construction. Their company has finished similar projects at or near the University of Southern California, the University of Nebraska and the University of Oklahoma.

Elsey Holdings also filed an application early this year to build an 85-apartment, six-story residential building in the Florence-Graham area of Los Angeles.

And last year the company announced plans to build two apartment buildings in San Francisco with 154 200-square-foot “micro-units” with bathrooms and kitchens, and 65 separate 50-square-foot “sleeping pods” in the basement. So far, that idea has not left the drawing board.