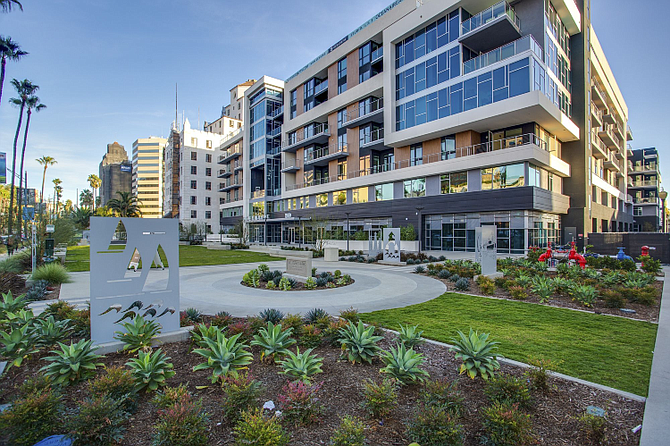 Built as luxury housing in 2019, the Oceanaire in Long Beach is now part of CSCDA’s middle-income program.

For years, policymakers in Los Angeles County and other pricey regions of California have bemoaned the difficulty of providing housing for middle-
income residents.

Affordable housing for low-income residents is also desperately needed, but established and new methods are being employed to develop these units and are being implemented throughout the state. Similar programs aimed specifically at middle-income earners have been nearly nonexistent — until recently.

In the last two years, joint powers including the California Statewide Communities Development Authority and the California Community Housing Agency have begun implementing new workforce housing initiatives. Through these programs they work directly with cities and private firms to purchase market-rate buildings and reduce rents to levels affordable to essential workers and other middle-income tenants.

“We’re starting to accumulate a lot of positive leasing data from projects that closed earlier this year,” Penkower said. “We can see who’s moving in, and it’s the intended demographic of first responders, teachers, health care workers and recent public school graduates.”

CSCDA has acquired 16 properties since December, including eight in Los Angeles County. These deals have been approved by city officials in Carson, Glendale, Long Beach, Monrovia and Pasadena.

Under the terms of the program, CSCDA issues tax-exempt bonds to finance the purchase of target properties, which remain in the hands of the authority for up to 30 years, when the bonds reach maturity. Because the properties are not privately held, they are exempted from property taxes, and those savings allow rental prices to be maintained at levels affordable to tenants earning between 60% and 120% of the area median income.

At the end of the 30-year bond period, cities can choose to take over ownership of the property or sell to a new buyer, collecting the proceeds from the sale. Participating cities don’t have direct ownership of properties prior to that but can force an earlier sale after 15 years.

Buildings purchased through the program are owned by public entities, but private firms experienced in creating affordable housing and securing bond financing are brought on to participate in each transaction.

Newport Beach-based Waterford Property Co. has worked on the acquisition of nine properties purchased through the program. Waterford co-founder Sean Rawson said the company serves as an asset manager or project administrator in these deals, overseeing the purchase of properties and their operation.

“We saw this program as the perfect nexus of our existing skill sets and experience,” said Rawson, pointing out that Waterford’s portfolio includes both low-income and market-rate rental properties.

“We’re now able to buy these newer-constructed Class A assets and convert them to essential housing,” he said.

Rawson pointed to the Oceanaire apartments in Long Beach as a prime example of the type of project these programs allow. Completed just two years ago, the property is in the heart of downtown Long Beach and boasts amenities such as a 24-hour fitness center, a swimming pool and a rooftop lounge.

Waterford partnered with CSCDA to acquire the property earlier this year, and Rawson said qualifying middle-income tenants have already moved into 76 apartments in the 216-unit building.

“We’ve seen government employees move in,” Rawson said. “We’ve seen employees of the school district and public safety employees. … This is the demographic that would usually have been priced out of quality housing like this in Long Beach.”

Rawson said the Oceanaire project has earned rave reviews from tenants and elected officials — though it hasn’t been without its critics.

An analysis from HR&A Advisors Inc. commissioned by the city of Long Beach on the Oceanaire project was highly critical of the program operated by CSCDA. Its authors warned that the millions of dollars in property tax revenue lost as a result of the project could be difficult to recoup because the real estate market could shift significantly by the time the property is eligible to be resold.

The HR&A report also noted that immediate rent savings would be relatively insignificant for tenants at the higher end of the middle-income range, reducing the project’s overall impact on the local housing market.

Ultimately, the Long Beach City Council voted unanimously to move forward with the project, but similar concerns have been raised by other cities considering participation in the program. In May, the San Jose City Council asked city staff to work with the Bay Area Housing Finance Authority to develop an alternative version of the program taking into account issues raised in the HR&A report.

Rawson said critics of the program fail to consider the cost savings tenants could enjoy over time, assuming rental prices continue to move upward at current rates. For units established through the program, annual rent hikes are capped at 4%, well under the 8.6% currently allowed under the state’s rent control policy.

Rawson said this ensures residents can better predict future expenditures while residing in housing that is both high-quality and affordable.

“That’s what’s so powerful about this program,” he said. “There just hasn’t been anything like this for this demographic… the fact that you’re able to buy a newly constructed asset and lower rents — I will tell you that’s extremely rare.”

What remains to be seen is how long it will take for middle-income tenants to occupy all the units at Oceanaire. Penkower noted that once properties are acquired by a joint powers authority, existing tenants may choose to continue with their leases, though they will also continue to pay market-rate rents if their incomes don’t qualify for a rent reduction.

“Over time, we expect nearly all of them will leave,” Penkower said. “That process may take two or three years, but the turnover at some of these properties is really high.”

Penkower explained that the timing of the program’s launch turned out to be somewhat fortuitous. Low interest rates have made it easier to finance acquisitions, while uncertainty in the real estate market has made it possible to acquire properties financially impacted by the pandemic.

“Because of Covid, a lot of market-rate buyers hit the pause button,” Penkower said. “They didn’t really know what was going to happen to the multifamily marketplace.”
Now, both rents and interest rates are back on the rise, and Penkower said acquiring properties may become more difficult in the future.

That’s one reason why participants in the program are also pursuing opportunities to construct new housing.

In August, Standard Communities, which has an office in Century City, and West
Hollywood-based Faring Capital announced a partnership and plans to invest $2 billion in middle-income housing across California — both through acquisitions of existing properties and ground-up development.

Cruz said the financing structure for construction of new units is the same as the one used for acquisitions, but that the challenges of building an entirely new project make these investments significantly more complicated.

“These projects are also more expensive to finance than a conventional construction project,” Cruz said. “When you combine these things together, it’s a more difficult task to find a project that works.”

Penkower said higher construction costs are difficult to avoid when using this type of bond financing due in part to prevailing wage requirements attached to such projects. Still, he said a key part of the program’s success will be increasing the housing stock within participating cities.

Cruz said awareness of the program is spreading quickly among city officials throughout Southern California, and that policy makers understand the urgency of finding housing solutions for residents at all income levels.

“The program is a step in the right direction,” said Cruz. “No one said it’s perfect, but all the PR is building awareness for the demand and the need for housing that caters to the missing middle.”

For reprint and licensing requests for this article, CLICK HERE.