Kevin Wayne Durant is an American basketball player the Brooklyn Nets of the National Basketball Association (NBA). In his college years, Durant played 1 season for the University of Texas’ Texas Longhorns before he was selected in the second overall pick in the 2007 NBA Draft by the Seattle SuperSonics – now known as the Oklahoma City Thunder after their relocation. Durant played 9 seasons with the team before signing with Golden State Warriors in 2016, where he would win back-to-back NBA championships between 2017-2018. Following an injury with his Achilles heel, Durant left the Warriors and joined the Brooklyn Nets as a free agent in 2019. While Kevin Durant’s skills on the court have made him widely considered one of the greatest basketball players of all time, did you know this ball player also has some pretty great taste in real estate? Check out the full tour of Durant’s property portfolio below!

Where Does Kevin Durant Live?

Being a mega star in basketball, it’s no surprise fans are asking “where does KD live?”

As of 2022, the NBA pro is living in a sprawling 10,000 square foot mansion in Kardashian land, aka Hidden Hills, Los Angeles. Since he only just moved there in 2021 and pre-purchased the come before its completion, however, details on the property are nonexistent, at least for now.

What we do know is that the spec home was designed in modern farmhouse style and is situated near the end of a cul-de-sac in the guard gated community.

Durant reportedly dished out $15.6 million for the mansion, which is said to be not far from fellow Brooklyn Nets player, Ben Simmons. 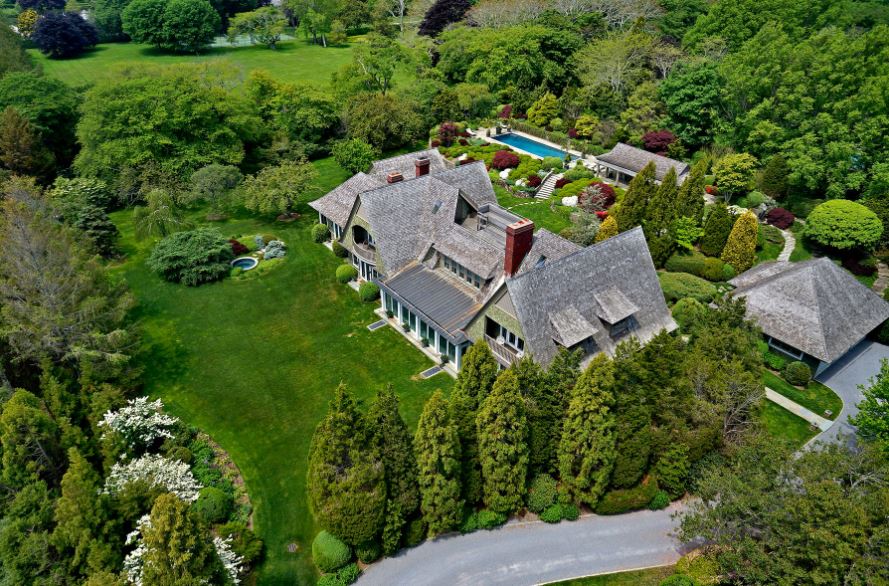 While the rental only last around 10 days, you can imagine Durant was living in pure luxury during his stay. Designed and formally owned by interior designer, Scott Sanders – this 5-bedroom, 5.5+ bathroom home is filled to the brim with amenities and opulence. 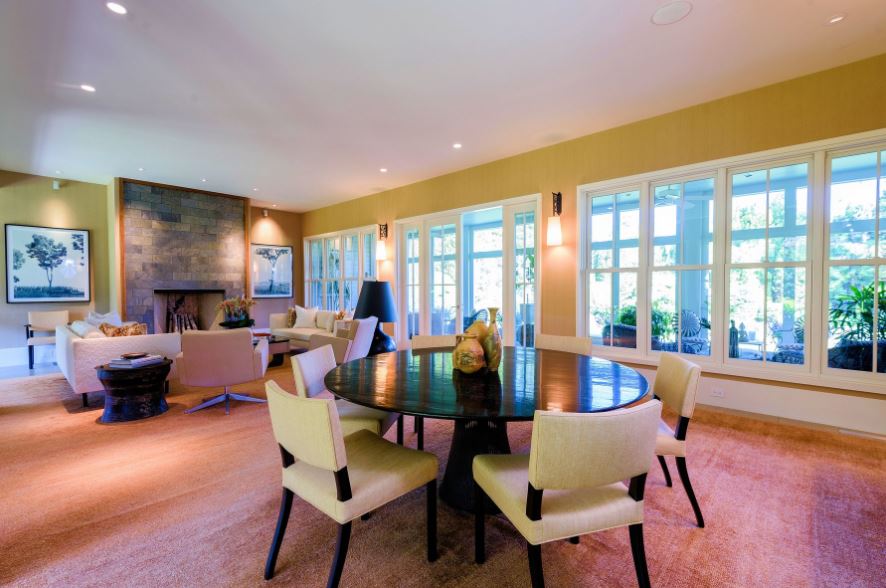 A sunroom on the main floor offers gorgeous views of the flourishing greenery and well-manicured 3.2 acres of land. 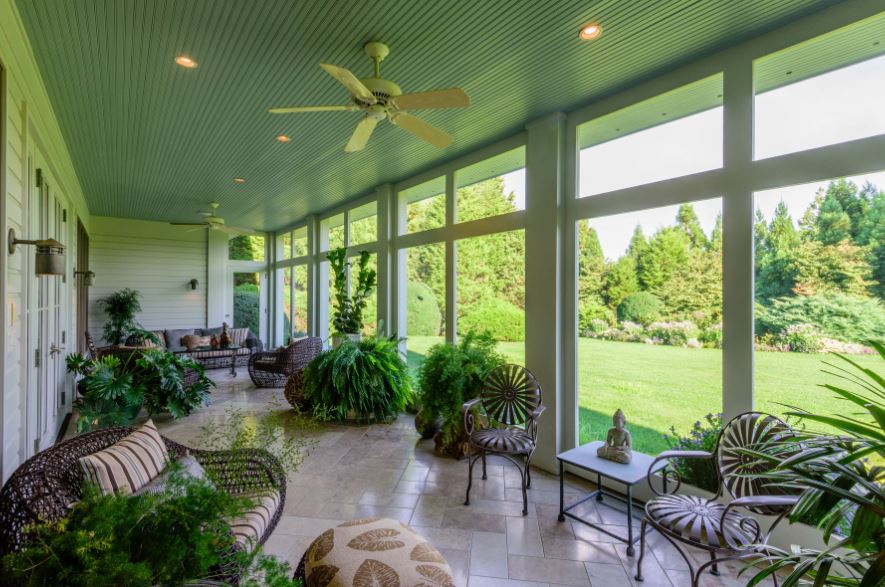 A combination of polished stone floors and mahogany creates a beautiful, earthy kitchen – all of which is amplified by the wall of windows that provide natural light and nature views. 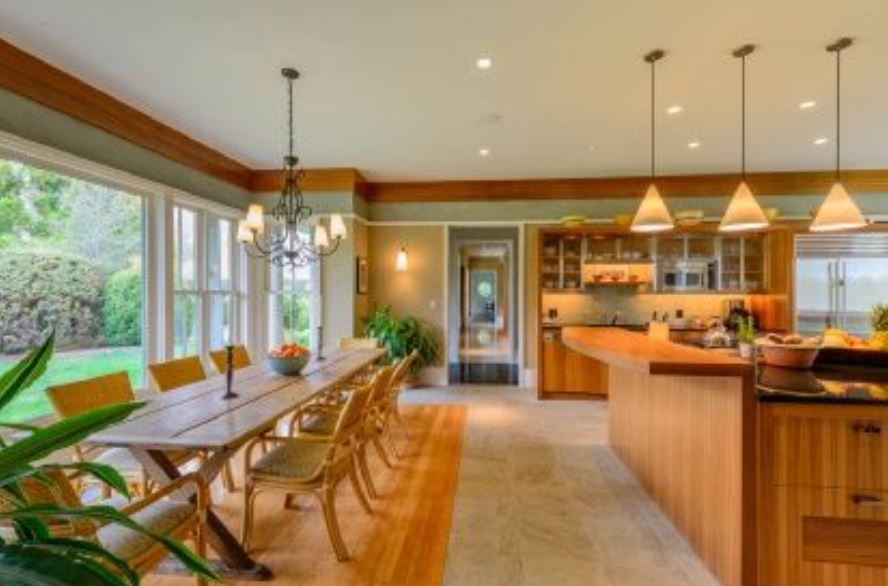 Upstairs, the master suite offers a private balcony as well as an ensuite with steam shower and large soaking tub.

While the mansion is only a block from the beach, residents won’t even need to leave the comfort of their opulent estate for a swim since there’s a huge swimming pool and spa just out back!

Some extra luxury amenities included here are a pool cabana with a summer kitchen, tennis court, jacuzzi grotto, gym, and a rooftop porch. 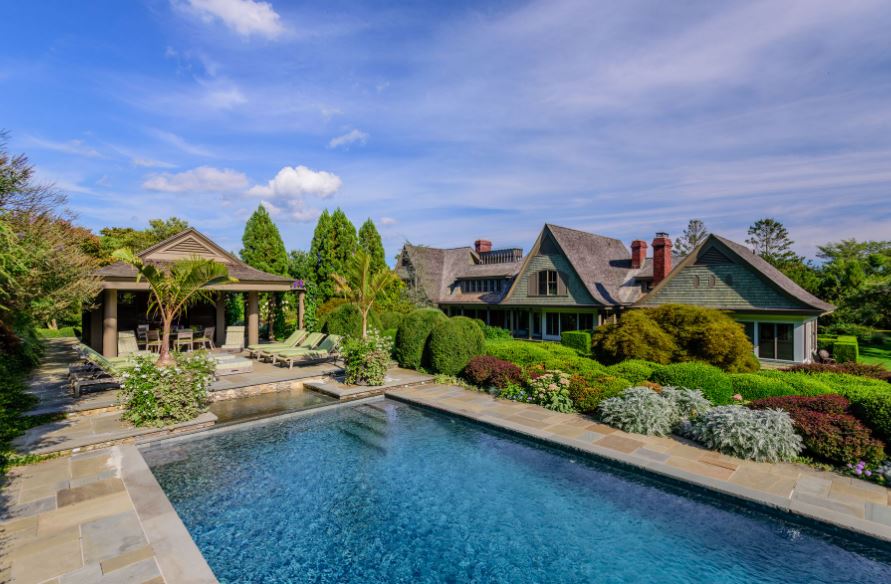 The property last sold in 2018 for $13.6 million. Rumors have it that Durant has since actually purchased another home in New York, but property records have yet to reveal any other Kevin Durant home in the area.

There’s also been speculation that there’s a Kevin Durant Brooklyn house somewhere out there, but this seems to be just a rumor. 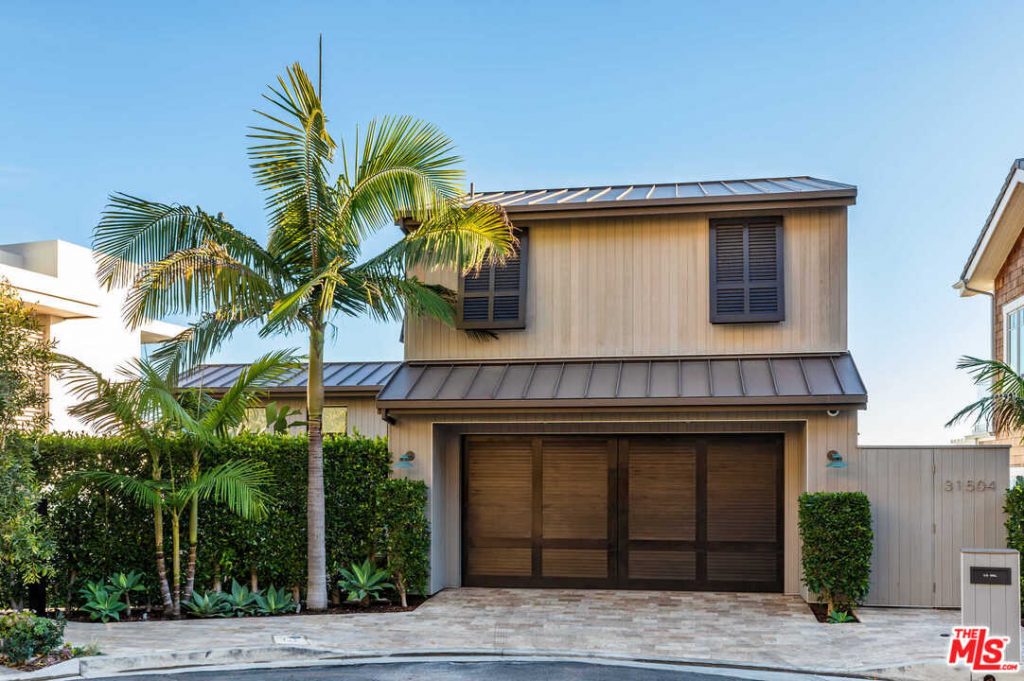 Featuring a sleek, modern design with walls of glass that offer easy indoor/outdoor living as well as skylights, high ceilings, and beautiful views of the Pacific Ocean – this 4 bedroom, 6 bathroom pad has it all – including an elevator that services all 3 floors! 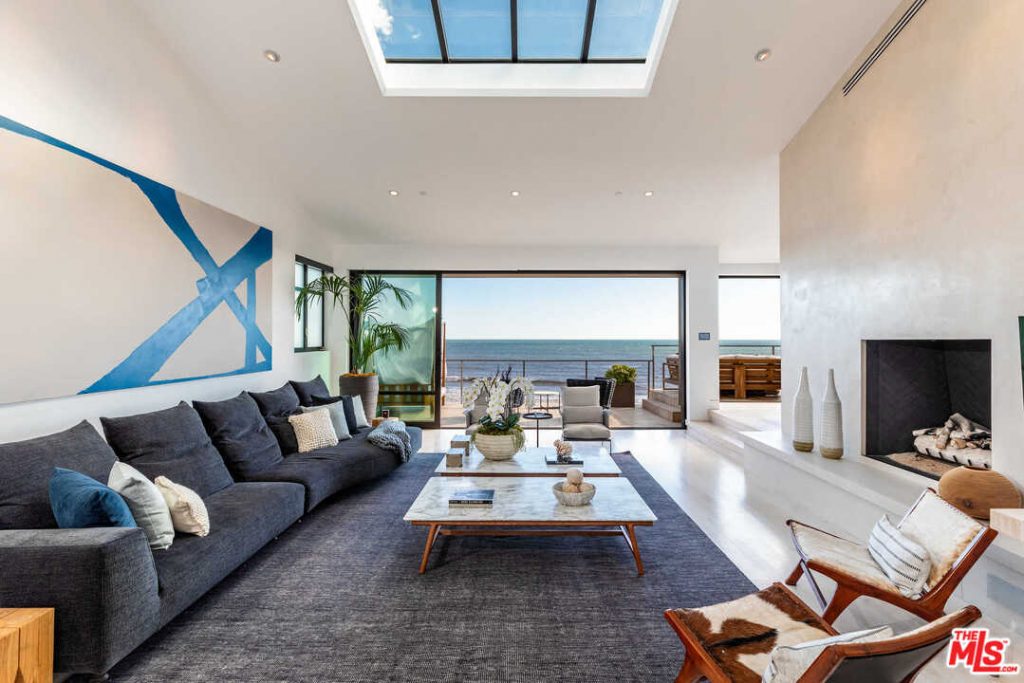 Just off the living room, a sliding glass wall opens out onto a truly stunning private balcony overlooking the ocean. 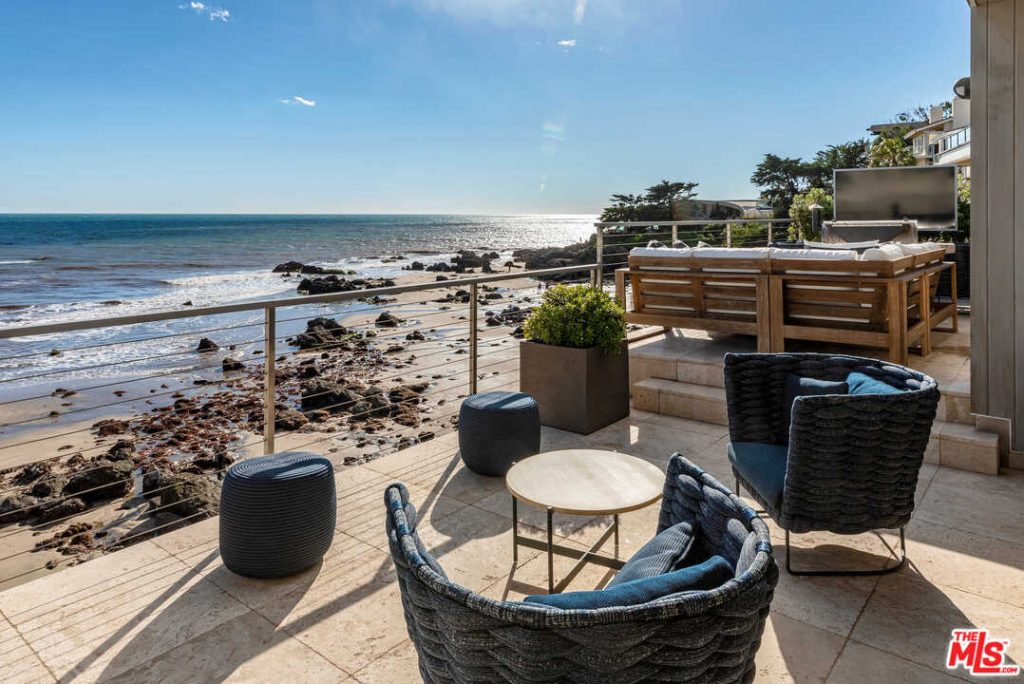 Just around the corner from the living room is the home’s spacious kitchen, featuring a marble waterfall island, a huge double door stainless steel fridge, and ample room for storage via the many standing and hanging white cabinets.

Across from the kitchen is the elegant dining room with yet another wall of glass that’s perfect for giving diners a feast for the eyes in addition to what’s on their plate.

Just imagine being able to enjoy a meal while you look out at that landscape! 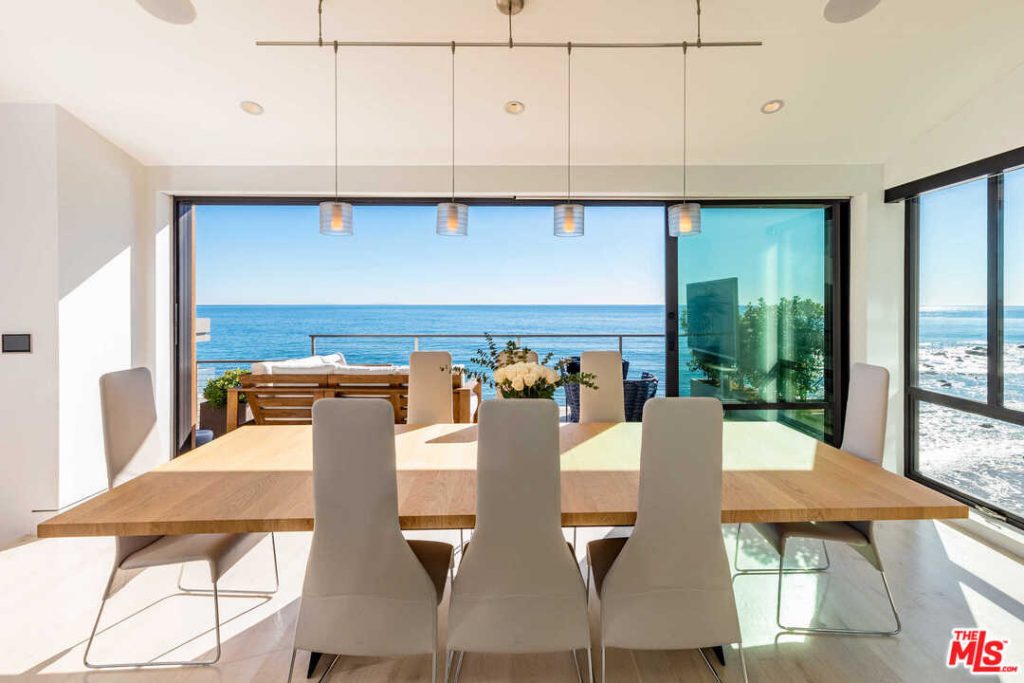 The home’s opulence carries into the master suite, boasting its own private balcony with ocean views, a beautiful modern fireplace, and French oak floors. 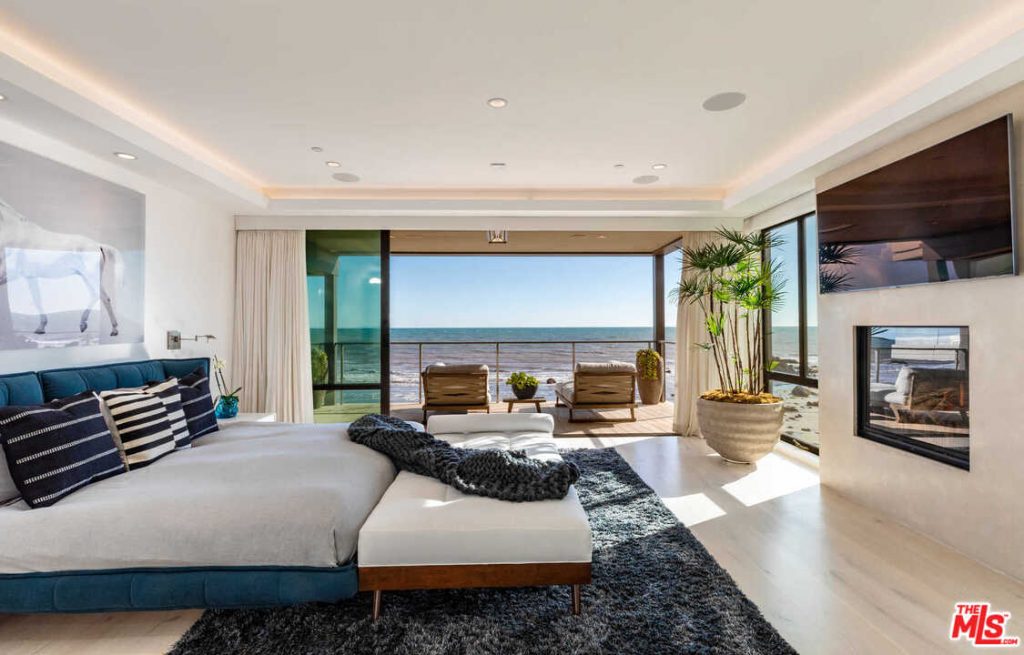 Looking like something straight out of a luxury spa, the master’s spacious ensuite features a single floating sink, a wooden accent wall with built in lighted shelving, a large bathtub, and an even larger steam shower with double shower heads.

Oh yeah, and those enjoying a nice soak in the tub will also be treated to some eye candy by way of a floor-to-ceiling window overlooking the Pacific! 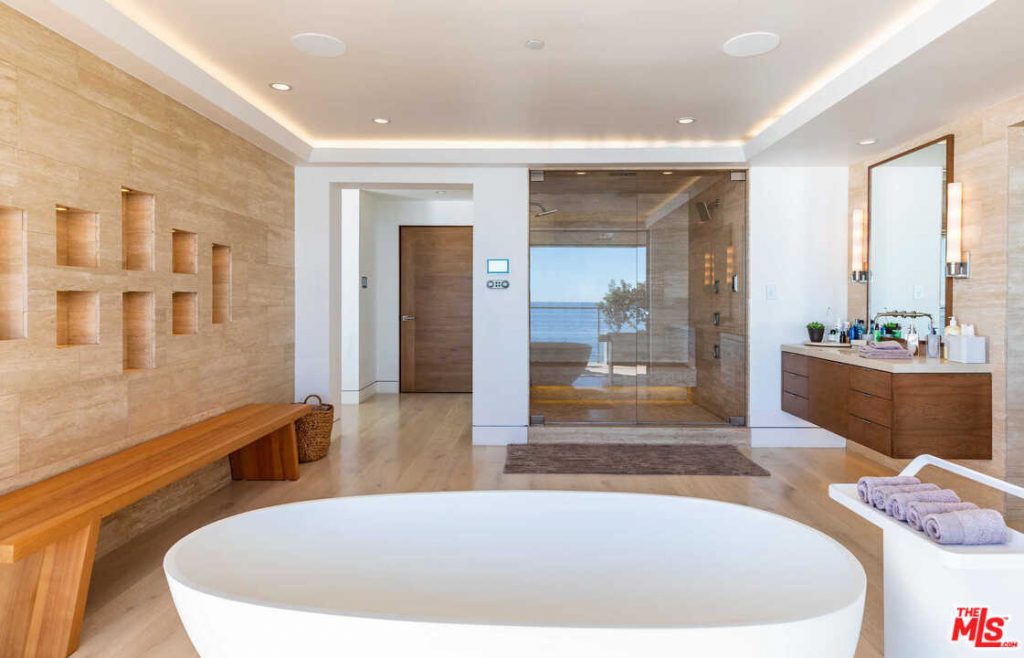 Perfect for entertaining, this additional living room space also features its own sliding wall of glass that opens onto a deck with more ocean views and a hot tub!

For all those wine connoisseurs, there’s even a glass wine cabinet in the room that allows you to put all those fancy bottles on display for guests – and a small bar nearby that’s perfect for wine tasting or just socializing with guests.

After only living in the home for a year, Durant listed his magnificent malibu residence in 2019, right before his move to the Brooklyn Nets, and ended up selling the place for $12.15 million.

Located in a upscale neighborhood atop Oakland Hills, this massive 7-bedroom, 8-bathroom estate was once called home by Keven Durant! 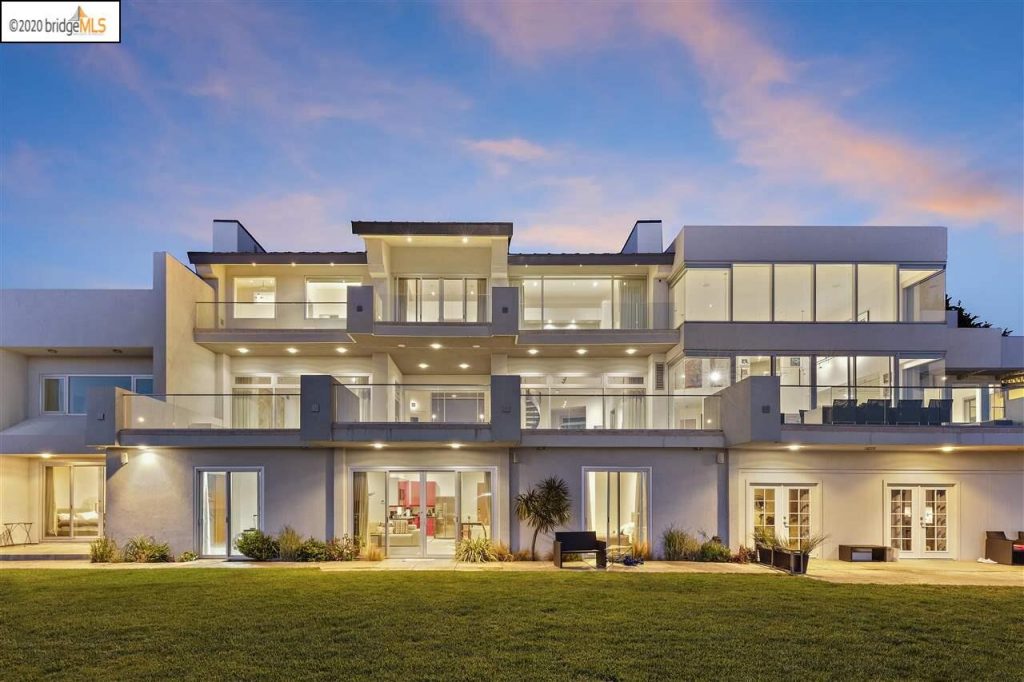 The contemporary style property consists of two apartments that bring the total square footage to a jaw-dropping 9,084!

While Durant only rented the home during his time there, the estate found a permanent resident in 2020 when it was sold for $4.8 million. 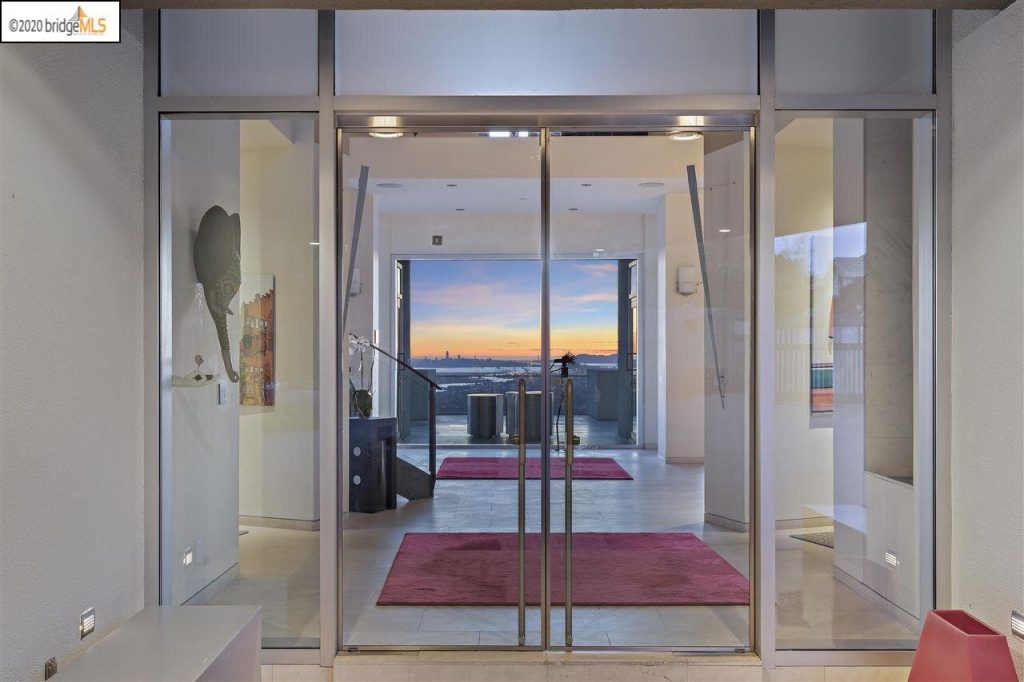 An open concept on the main floor offers residents ample space for entertaining – all while enjoying an unbeatable view of the San Francisco skyline and the Bay by way of tall glass windows and walls throughout the space.

Double doors in the living room open onto a chic outdoor balcony that provides an even better view of the city beyond! 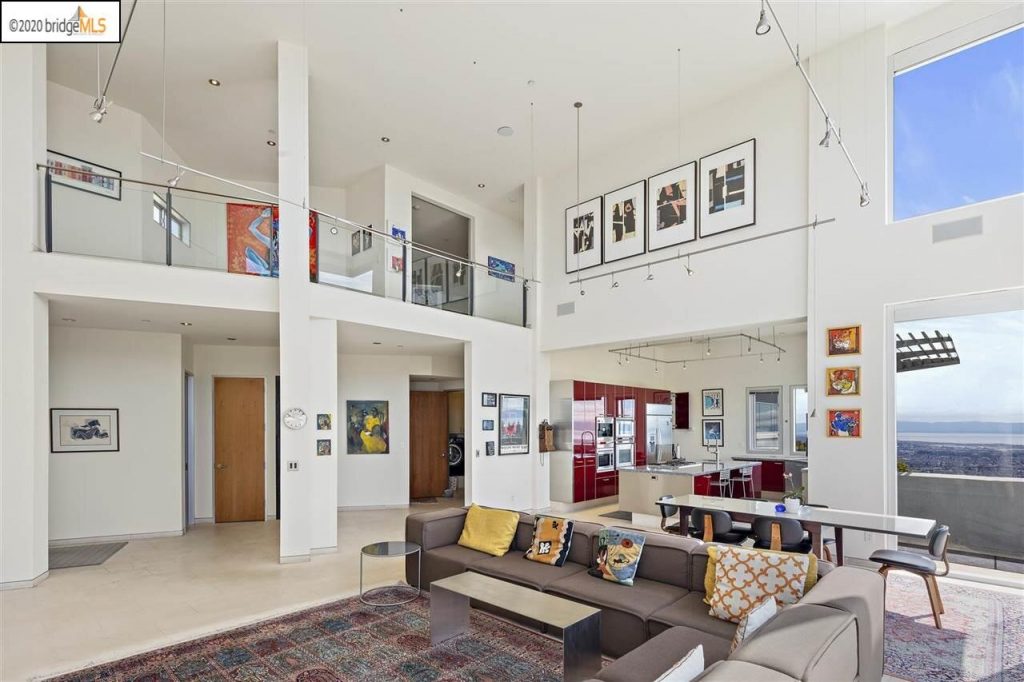 In the kitchen, a fun, modern setup with shiny red cabinetry, granite countertops, and a large center island tie the space together beautifully.

Above the whole scene, a skylight allows residents the chance to soak up some sun or stargaze right from the comfort of their own stylish kitchen! 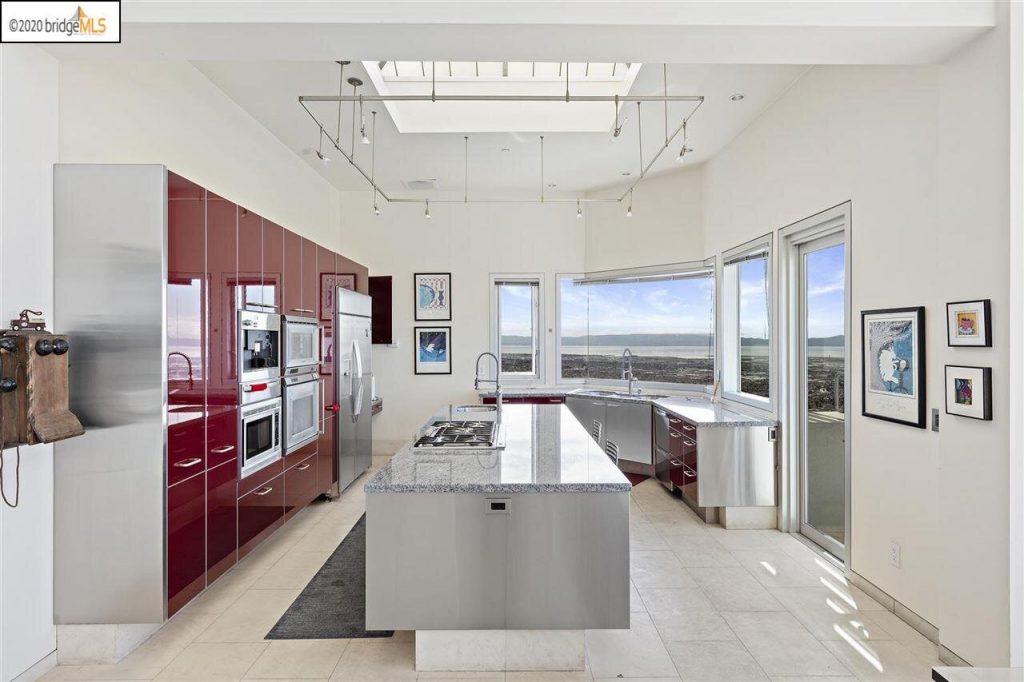 Movie buffs will fall head over heels for this estate’s private home theater, featuring plenty of cozy seating for the whole fam to catch a flick as well as a large screen and surround sound! 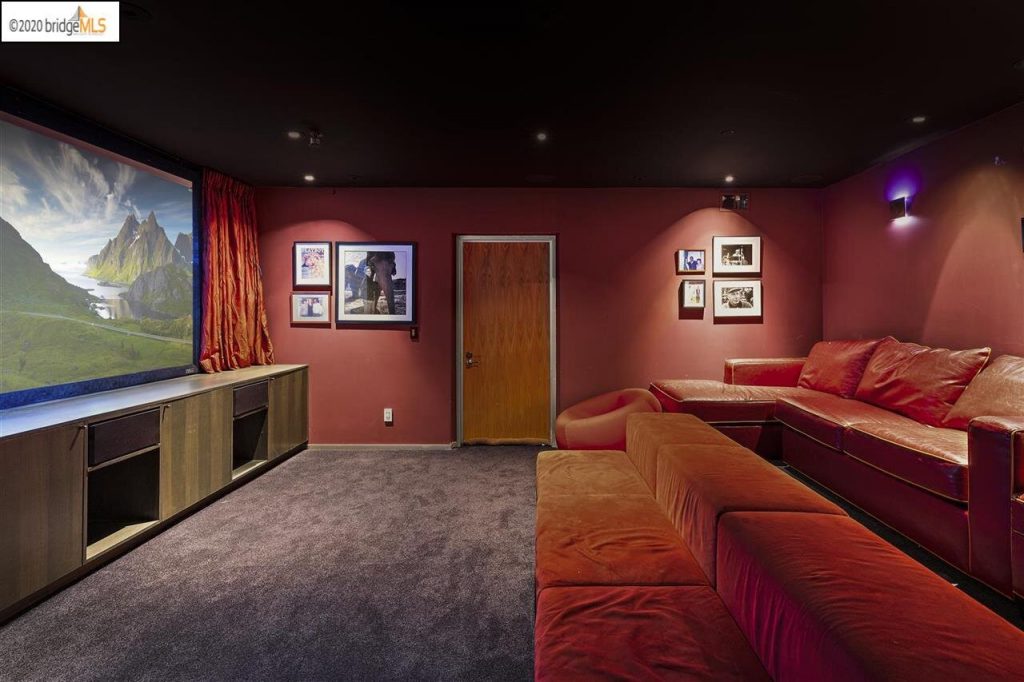 The master suite is far from your average bedroom – every wall it seems has a different shape, giving it a slightly abstract look. While the style is certainly not everyone’s cup of tea, you can’t deny waking up to that view would be incredible!

The mansion was built in 2005 and designed by architect Michael Burgess. In addition to everything that’s already been mentioned, the residence also features a spacious office, private basketball half court, and a circular driveway.

Durant no longer lives at this property and it was sold in 2020 for $4.8 million. 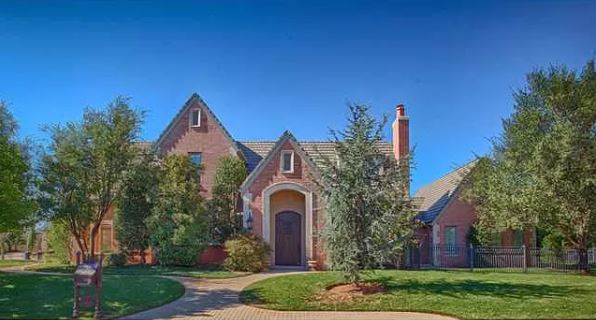 Step through the entryway of this spacious 5-bedroom, 4-bathroom home and you’re instantly greeted with a gorgeous living room, featuring hardwood floors and tall ceilings decorated in beautiful wood beams. 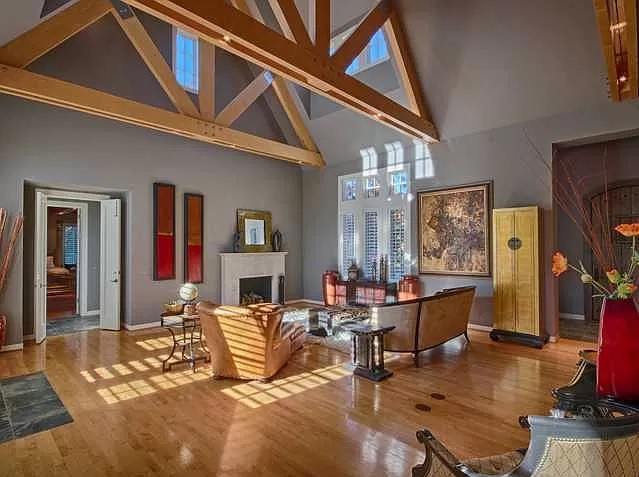 The formal dining offers plenty of space for entertaining and is lined with plantation shuttered windows that provide natural light to the space from all sides as well as a view of the pool out back! 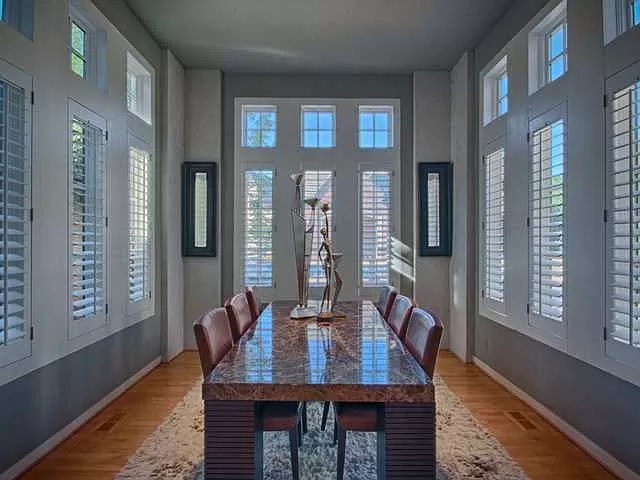 Admittedly, the patterns and colors used in the design feel a bit mix and match but given the sheer beauty of the layout and amount of room available, the odd style can easily be overlooked! 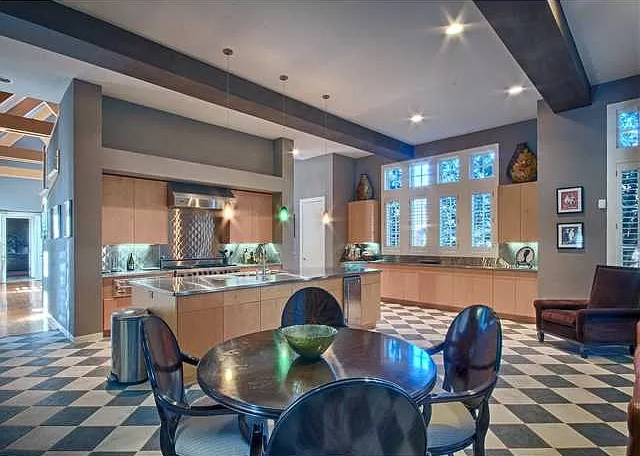 Now, the guest house kitchen, on the other hand, is absolute perfection! More high end appliances, a wine cooler, and wood cabinetry and backsplash to die for – you can’t help but fall in love with this space!

In addition to an amazing kitchen, the guest house also features a full bath, living room, laundry, bedroom, and measure a little over 2,000 square feet. 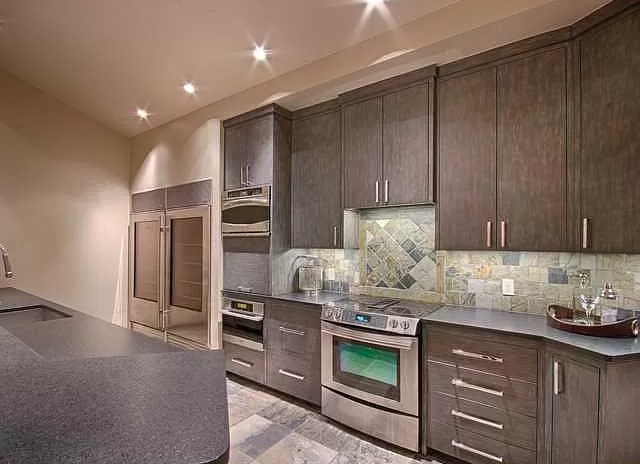 Decked out in a bold shade of red with massive wooden beams decorating the ceiling, this grander than grand master suite offers space for a massive king-sized bed and room to spare for a private sitting area.

Big collection of clothes and shoes? This room also features his and hers closets so no one has to fight for shelf space! 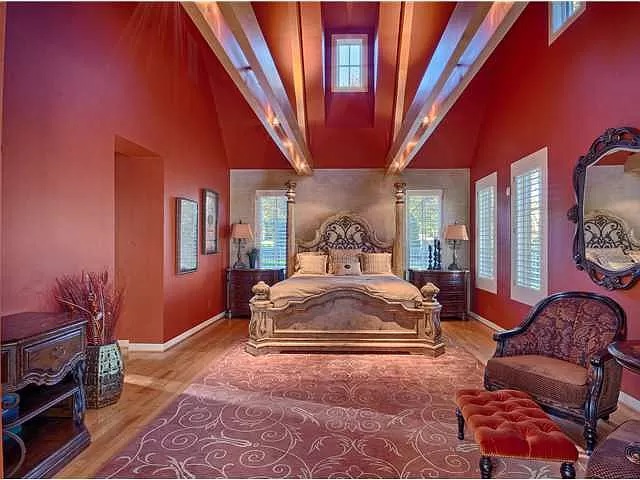 In ensuite bathrooms, it’s typically the tub and shower that really bring the WOW factor, but while the glass shower and soaking tub pictured here are nice, it’s definitely not what you see first.

In reality, the floating glass sinks, and towering vaulted ceilings create one of the most unique bathrooms you’ll find in Oklahoma real estate!

In the backyard, between the main house and guest houses, you’ll find a large swimming pool and spa as well as an outdoor fireplace and multiple covered lounging spaces.

How Durant managed to part with this gorgeous piece of real estate is beyond us!

In addition to his high-end real estate, Durant also has a pretty pricey collection of luxury cars worth a whopping $4.369 million! He owns the 8th most expensive collection among pro athletes and even surpassed fellow players LeBron James and Stephen Curry. 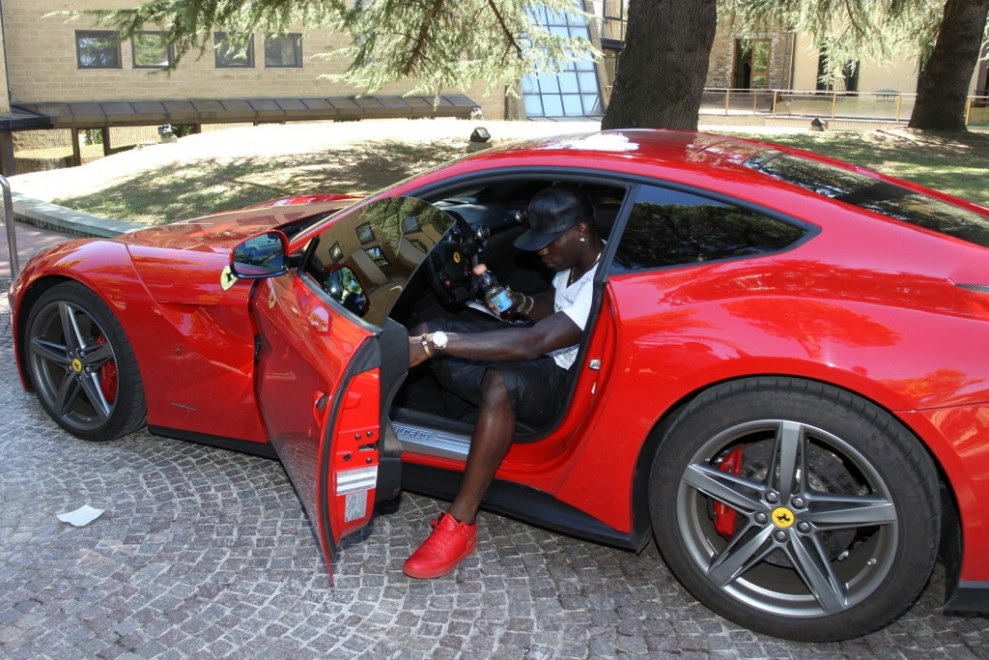 Some of the luxury wheels you’ll find in Durant’s garage include a 1966 Ford GT40 worth an estimated $2.5 million, a Lamborghini Aventador Roadster, a Ferrari, and an uber luxe Rolls Royce Phantom!

Kevin Durant was born and raised just outside of Washington DC in Seat Pleasant, Maryland.

Not long ago, Durant returned to his hometown to speak with children, family, and fans alike at the Seat Pleasant Activity Center to thank them for all the love and support they’ve shown him throughout his career.

Kevin Durant parents are Wanda Durant and Wayne Pratt. When Durant was still just an infant, his father left the family, resulting in he and Wanda legally divorcing not long after.

Wanda raised her children primarily on her own, only receiving help from her mother, Barbara Davis. 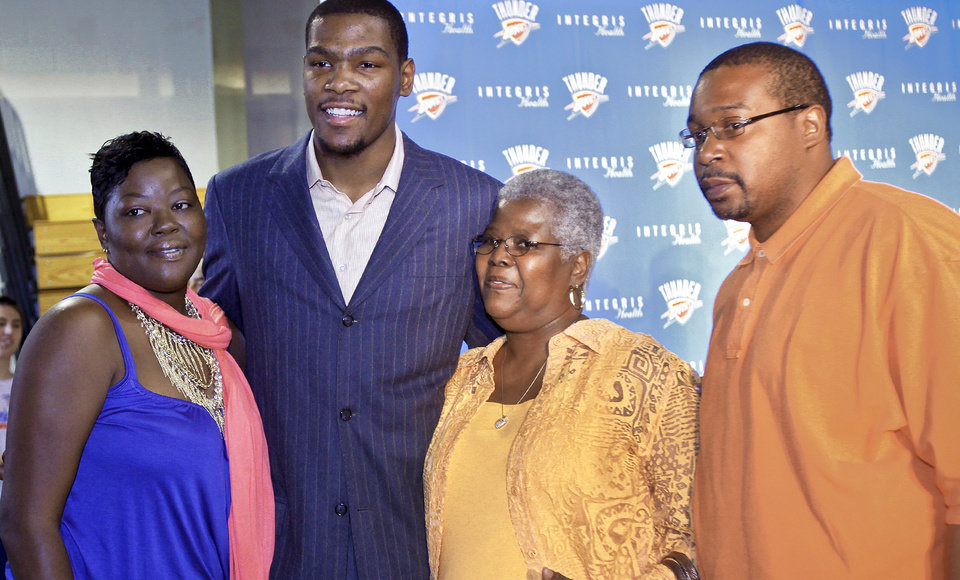 At age 13, Wayne reconnected with Kevin and ended up traveling the United States with his son during basketball tournaments.

Kevin has two brothers, Tony and Rayvonne Pratt, and a sister, Brianna Pratt.

Kevin Durant isn’t just one of the greatest basketball players of all time – he’s also one of the wealthiest! Between his endorsements and basketball career, the NBA star reportedly has amassed a sizable net worth of $200 million as of 2022!

In 2021, Durant is believed to have earned around $150 million from endorsements alone. In 2021, he signed a massive 4-year contract extension with the Nets worth a whopping $198 million!

Durant’s current annual salary with the Nets sits at a cool $42 million, a number that’s expected to increase up to $54.7 million by 2026.