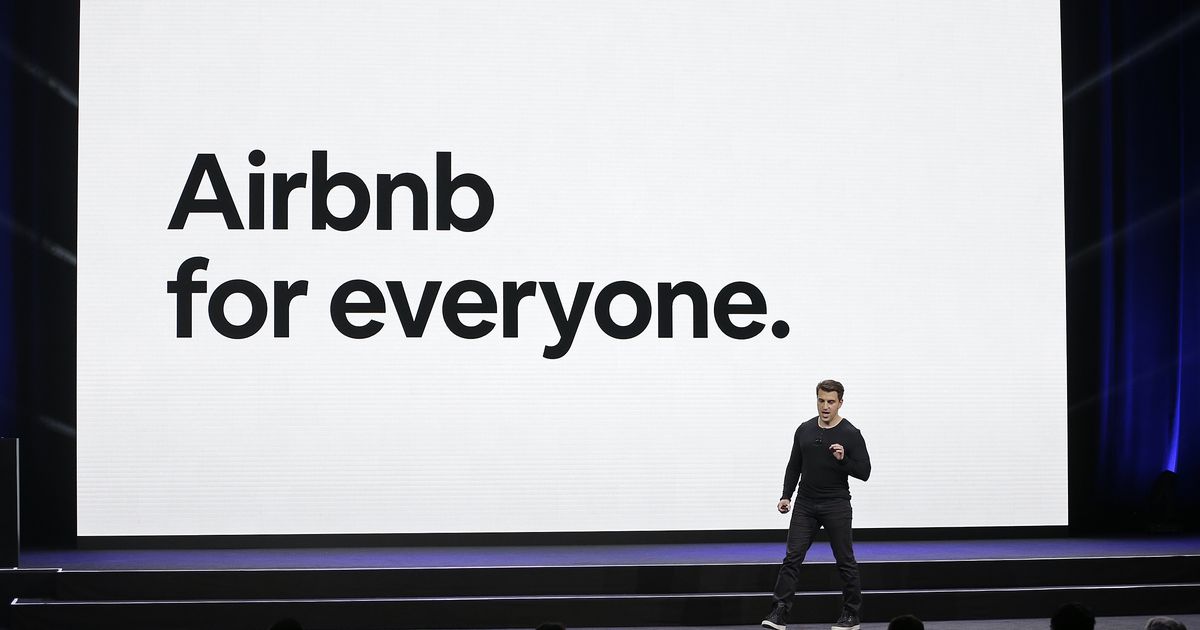 The Utah Legislature should let cities regulate the explosion of short-term rentals.

In this Feb. 22, 2018, photo, Airbnb co-founder and CEO Brian Chesky speaks during an event in San Francisco.

By Kimball Young | Special to The Tribune

As state and local leaders search for answers to Utah’s affordable housing crisis, there is unsettling news that investors bought nearly a quarter of U.S. single-family homes sold last year.

That matters because it often means many first-time home buyers got outbid by wealthy real estate investment firms. It also means more homes fall into the rental market, not home ownership market, further diminishing the dreams of those who want to have something of their own and build generational wealth. Studies show that in most cases after these transactions, rents are immediately increased, further disenfranchising those in need of housing.

While much of this action is taking place in the Sunbelt states, Utah is not immune. A staggering 27% — nearly one-third of home sales in Utah during 2021 — were associated with investors according to the respected publication Governing. That’s 20,541 homes – an increase of 26% from 2020 and there appears to be no slowdown. Utah is in line with other Western states experiencing this new phenomenon (Nevada, 30%; California 29%; Idaho 26%; and Arizona 31%.)

Research by a group of concerned neighbors in Salt Lake found real estate investor entities or LLCs own 118 single family zoned properties in Rose Park, 239 in Liberty Wells, 71 in Central City, 82 in Yalecrest, 44 in Highland Park and 75 in Fairpark – six of Salt Lake’s 20 neighborhoods. There are likely thousands of homes citywide involved. Sadly, this activity is higher in neighborhoods with lower land prices, where single family housing is not as expensive.

These figures are somewhat modest by national standards and may include “small-time” players, but state officials shouldn’t wait until this trend implodes here. Examples exist where a Utah-based real estate company raised tens of millions through a California-based investor crowdfunding source to purchase single-family homes and turn them into rental properties.

While Utah has a housing shortage of 45,000 homes, measures to free up homes locked into investors deals won’t fix the problem but could restore balance to the marketplace.

Another sector where Utah lawmakers might look for housing solutions is vacant housing. A study by the Kem Gardner Policy Institute (2021) concluded that about 7,517 vacant units could be brought to market in Utah, to provide immediate relief for those who need housing most. For example, 6% of the homes in Salt Lake’s Ballpark neighborhood are vacant.

Recently Gov. Spencer Cox cited the staggering number of short-term vacation rental properties (STRs) – 20,000 – available in Utah. Short-term rentals are illegal in Salt Lake and most other Utah cities, especially in residential areas. But enforcing those codes is problematic, as the Legislature allows cities to track the location of these properties by merely viewing listings but prohibits them to use this list to catch owners who break the rules.

Consequently, cities end up playing a game of hide and seek around suspected properties – taking license plates, fielding neighbor complaints, and even trying to nab unsuspecting STR renters. The effort is time-consuming and takes years to enforce. The Legislature needs to free cities from these arduous rules.

If placed back in the housing marketplace, many of these 20,000 STRs could offer places for Utah’s workforce to live.

The Salt Lake Planning Division is currently promoting an affordable housing incentive program that would provide incentives to developers in exchange for the creation of additional affordable housing units. The proposal would apply to all zones within the city — commercial, multi-family and single-family. In multi-family zones this plan would allow additional building height and in single-family zones would permit infill of two, three and four family units like fourplexes and row houses.

As most of the city’s mature single-family zones are built out, this could result in demolition of smaller older homes, and replacement with larger multi-family units. Will this too become the province of out-of-state commercial developers and absentee landlords? It is a matter that needs careful consideration and community engagement.

In searching for answers to Utah’s affordable housing puzzle, state and local leaders need to work with communities and neighborhoods to find the best answers, not just listen to developers who stand to greatly benefit, while irrevocably changing our city.

When residents are seen as stakeholders and joint problem-solvers, real progress takes place.