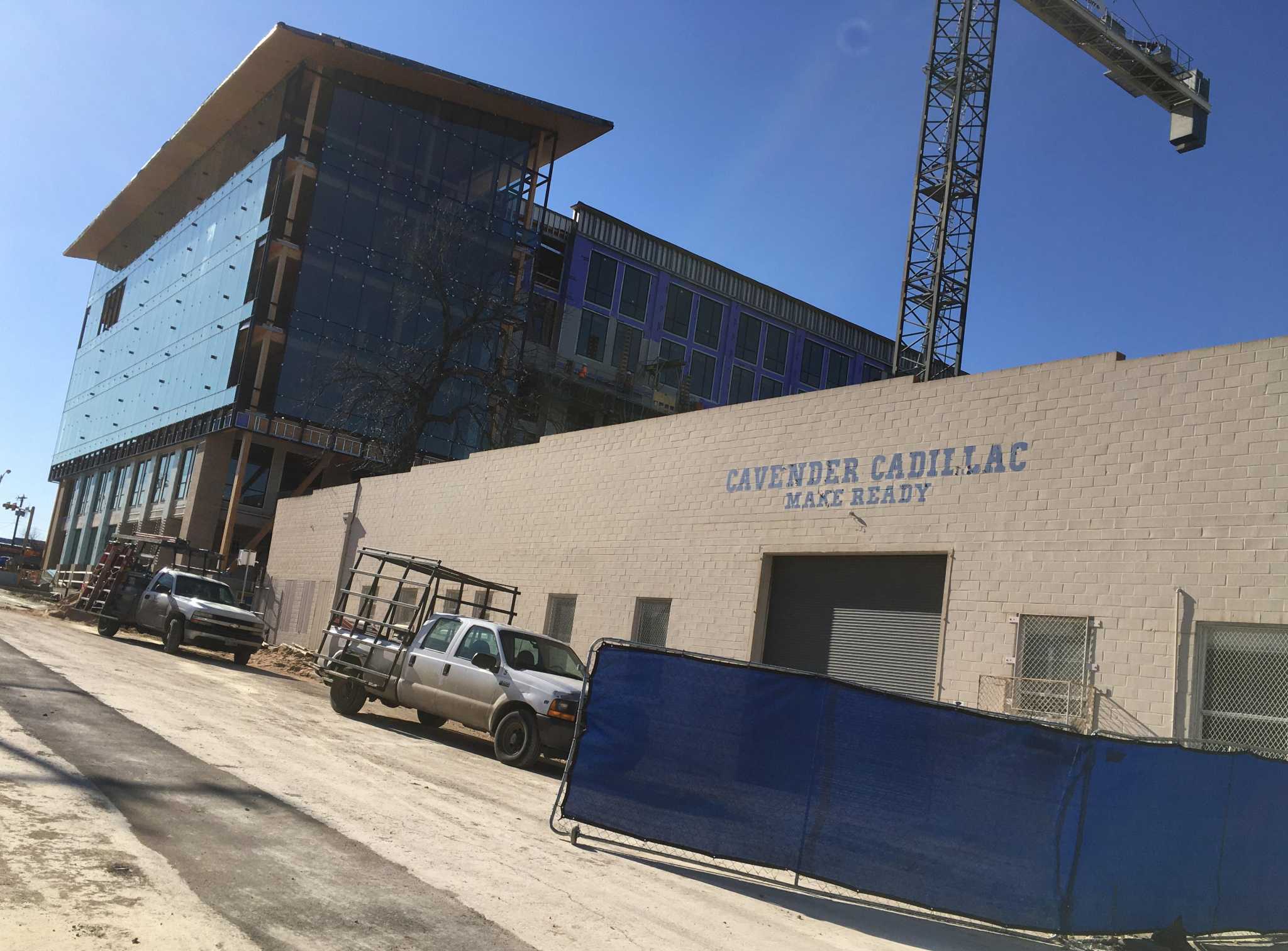 A mini-neighborhood along Broadway in north downtown is moving ahead as San Antonio builder Hixon Properties considers demolition of two warehouses to make way for surface parking and area development — including a new brewery — takes shape.

Hixon recently submitted plans to the city’s Office of Historic Preservation to tear down a 1960s-era warehouse at 902 Avenue B — the former location of the San Antonio Brake and Clutch auto shop — as well as a windowless, 1980s-era warehouse at 931 Broadway to build two surface lots with a combined 168 parking spaces.

The firm, which is working on the area’s redevelopment with the Cavender auto family, hasn’t decided to raze the buildings, Chief Investment Officer Clint Wynn said in a text message response to questions. It intends to restore what he called the “old Buick dealership building,” a three-story brick warehouse at the northwest corner of Broadway and 10th Street, which dates to 1927 and is a city-designated historic landmark.

“We do not have any long-term plans at this point,” he said.

Two blocks away, the Hixon-Cavender partnership is working on rehabilitating a 1920s-era former auto dealership into a brewery. It would operate as part of the Los Angeles-based Pouring With Heart bar chain, which has 25 locations in California, Colorado and Texas. Each of the chain’s five Texas bars are in Austin, with another due to open soon in the Rainey Street district, according to information on its website.

Wynn didn’t respond to questions about the brewery. Mariam Parker, a spokeswoman for Pouring With Heart, said the company is “not in a place to chat details just yet.”

A garage at 203 8th Street that served the Cavender Cadillac dealership on Broadway, might have a future as a food hall, according to documents fiiled with the state. The project is named the Make Ready Dining Hall, and it is located behind The Soto, a six-story complex undergoing construction.

The proposal to demolish the two buildings is subject to review by the Office of Historic Preservation but it won’t be considered by the city’s Historic and Design Review Commission because the buildings are not within a historic district.

The brewery will be part of the Make-Ready Dining Hall, a food-and-beverage market that the Hixon-Cavender partnership plans to open behind its Soto office building. The market will include a dozen local vendors including a location of the Mila Coffee café, according to an announcement Hixon made in April. It is expected to open late this year.

The opening of the brewery will add to a growing concentration of bars and breweries in north downtown. The area already features Bentley’s Beer Garden, La Roca Cantina, Roadmap Brewing Co. and Social Spot; another bar, the Lucky Duck, recently opened nearby.

The Hixon-Cavender partnership has been working on its plans for north downtown since 2015, when the Cavender family — which had operated auto dealerships in the neighborhood for more than half a century — granted Hixon almost equal interest in 5.8 acres of property it owned around Broadway.

Since then, the partnership has purchased more land, including the 931 Broadway site last year.

The partnership finished construction of the first major component of the mini-neighborhood, the six-story, 141,000-square-foot Soto office building, in September 2020. The high-end office space then sat vacant for a while, after the Covid-19 pandemic threw the downtown office market off-kilter, but its third and fourth floors are now fully leased, according to its website. Yet 74,000 square feet of the space remains unleased, or slightly more than half of the total.

Wynn declined to say who had leased the Soto’s space. “We have been busy leasing up the Soto,” he said.