Board of Port Commissioners approves

The Port of San Diego Board of Port Commissioners has granted concept approval for a 450-room hotel development by Sunroad HIE Hotel Partners L.P. and has also authorized the issuance of a Coastal Development Permit for the project.

Sunroad’s project is anticipated to break ground in late 2023 and could open, based on the current estimated timeline, by late 2025. Sunroad’s development consists of a 450-room hotel with two yet-to-be-determined brands: a 12-level wing with extended stay rooms and a 15-level wing with limited-service rooms. Amenities open to the public would include a walk-up restaurant and bar area accessible via the sidewalk on Harbor Island Drive, designated public parking spaces, a 15-foot-wide waterfront promenade, and temporary and permanent mini destinations to draw people to and through the hotel and amenities by creating various activating uses, such as artwork, benches, mobile carts for retail/specialty items and/or food and game/exercise spots.

He fills the vacancy created by the retirement of Judge Charles G. Rogers. Cumba is registered without party preference.

He fills the vacancy created by the retirement of Judge Randa M. Trapp. Pulos is registered without party preference. 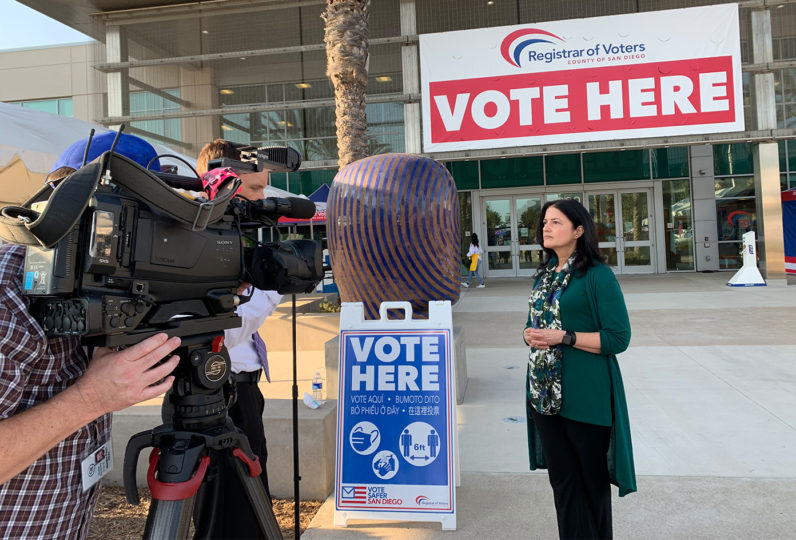 Registrar of Voters Cynthia Paes appears before the media.

No stranger to running local elections, Interim Registrar Cynthia Paes has now been appointed as the new San Diego County Registrar of Voters.

Paes has been acting as interim registrar since January and has shepherded her team through four elections, including the recent statewide gubernatorial recall election.

Paes also successfully launched several firsts after the Board of Supervisors decided to move the County to the Voters Choice Act.

All of the County’s 1.97 million voters received mail-in ballots during the recall election. Assigned polling places were replaced with voting locations allowing voters to cast their ballot at any one of more than 200 sites and ballot marking devices were introduced to all in-person voters.

Paes started with the county in 2002 with the Health and Human Services Agency. In 2011, she became the chief deputy of the Election Services Division and within two years, she was promoted to assistant registrar of voters. She became the interim registrar when the former registrar, Michael Vu, became the county’s assistant chief administrative officer. 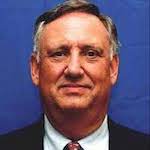 California will receive about $45.5 billion from the infrastructure improvement legislation that Congress approved last week, which sounds like a lot of money.

In fact, it’s the largest share of the $1.2 trillion program of any state and President Joe Biden wants Californians to be appreciative.

“The historic Infrastructure Investment and Jobs Act will make life better for millions of California residents, create a generation of good-paying union jobs and economic growth, and position the United States to win the 21st century,” the White House said in a statement detailing the state’s share.

From a relative standpoint, however, California’s allocation is small. At just over $1,200 per Californian, it’s one of the lowest of any state. States with relatively small populations, such as Alaska and Vermont, benefit the most on a per-resident basis.

Manager of the Year for San Diego County 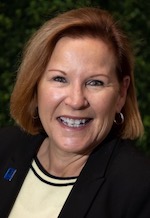 The award was announced at the 2021 IREM Global Summit in Las Vegas, Nevada.

“I’m stunned and humbled to win this international honor,” said Lilley, who – in addition to her executive role at FBS Property Management – is president of the Southern California Rental Housing Association.

Lilley dreams of evolving the real estate management profession to become equally human-centric as well as profit-centric. To get there, she’s been leading her organization with people-driven management concepts that bring out the best in people, resulting in greater revenue generation.

and Gary Spradling join the team

Gary Spradling focuses on providing expert counsel to clients in the health care field in connection with selection of the appropriate entity for the start-up of their business in order to achieve their desired business objectives. He works closely with clients in all phases of their business. 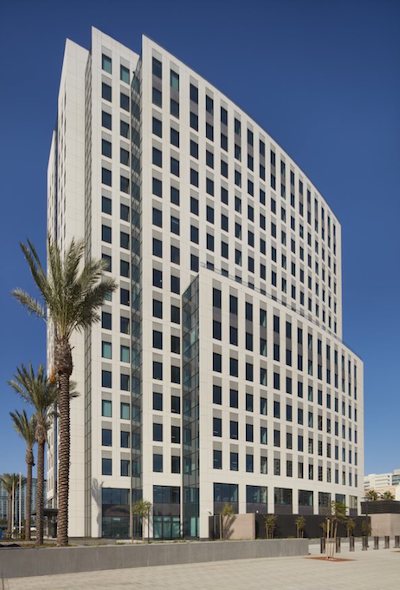 The Navy General Administration Facility in San Diego that was built by Turner Construction Company has received two industry awards. The project won a National Award of Merit in the Federal, State, County, Municipal category by the Design-Build Institute of America. It also received a Regional Best Project Award in the Government/Public Building category from Engineering News-Record.

The design-build Navy General Administration Facility building is a Class A, build-to-suit high rise, which serves as the new administrative offices for 1,700 Navy

employees including the Southwest Command. The 376,424-square-foot building rises 17 stories with views of San Diego Bay.

The building contains a command center with raised-floor cabling and emergency power provisions. A subterranean parking garage with 459 spaces for Navy employees is included.

On Sunday, Nov. 14, SDAR and the Mainstreet Organization of Realtors from Illinois will tour with attendees of the convention from foreign countries to view recent and upcoming developments in Downtown San Diego, followed by a tour of new developments in South County. The purpose is to raise San Diego’s profile among foreign nationals and encourage investment in San Diego residential and commercial properties.

“In the past two years, foreign buyers have purchased more than 250,000 residential properties in the U.S., amounting to over $125 billion in transactions,” said Matias Susel, chair of SDAR’s International Real Estate Committee.

San Diego LabRats, an Encinitas based nonprofit that teaches science, technology, engineering, art and math, has received a $25,000 sponsorship from Ting Internet, a division of Tucows Inc., and, a leading fiber internet provider in the U.S.. The sponsorship will provide funding for 700 ESL and Title I scholarships that will be distributed by the end of 2021. 1. and will be used to raise awareness of LabRats’ innovative STEAM Discovery Center in Encinitas.

The sponsorship makes Ting Internet the “presenting sponsor” for all social media marketing for San Diego LabRats until the end of 2021. The campaign will include launching a new version of the LabRats website, an email marketing campaign, and promotion across all social media channels. The sponsorship will also fund access for students to BrainStemTV.org, which provides video lab lessons for students in the Solana Beach and Encinitas markets.

Motto Mortgage, a San Diego mortgage brokerage franchise focused on customer service, transparency and compliance, has a new office in San Diego. Motto Mortgage Mint is now open and serving all markets throughout the Golden State. It is located at 9474 Kearny Villa Road, San Diego 92126.

Motto Mortgage Mint is a customer-first, full-service mortgage brokerage established by Jericha Jose, who has more than 20 years of experience in mortgage lending and the real estate industry. She specializes in first time homebuyer loans, jumbo loans, purchases, and refinances. Jose has helped homebuyers in both the San Diego and San Francisco areas achieve their mortgage goals.

Loan originators in the Motto Mortgage network have access to competitive loans from various wholesale lenders and work hard to give homebuyers choices because no loan is one-size-fits-all.

The winning bid is the result of a multi-year effort led by a binational team of designers, innovators and civic leaders to help San Diego-Tijuana showcase its design-driven, innovative culture and economy. The bid campaign, known as HOME 2024, demonstrates how the San Diego-Tijuana region mobilizes human-centered design to address major global problems like climate change and social inequity through engineering, science, art, architecture and more.

Institutions earning the Military Friendly Employer designation were evaluated using both public data sources and responses from a proprietary survey. Over 1,000 companies participated in the 2022 Military Friendly  survey.

Cubic will be showcased along with other 2022 Military Friendly  Employers in the December issue of G.I. Jobs  magazine and on www.MilitaryFriendly.com.

The study is based on responses from 5,414 total respondents in June through September 2021 for customers who originated a new mortgage loan in the past 12 months.

Share
Facebook
Twitter
Pinterest
WhatsApp
Previous articleSan Diegans were promised a waterfront museum 30 years ago. Here’s why they may never get one
Next articleA new Four Seasons resort opens in Napa Valley with a working winery
nxtgen