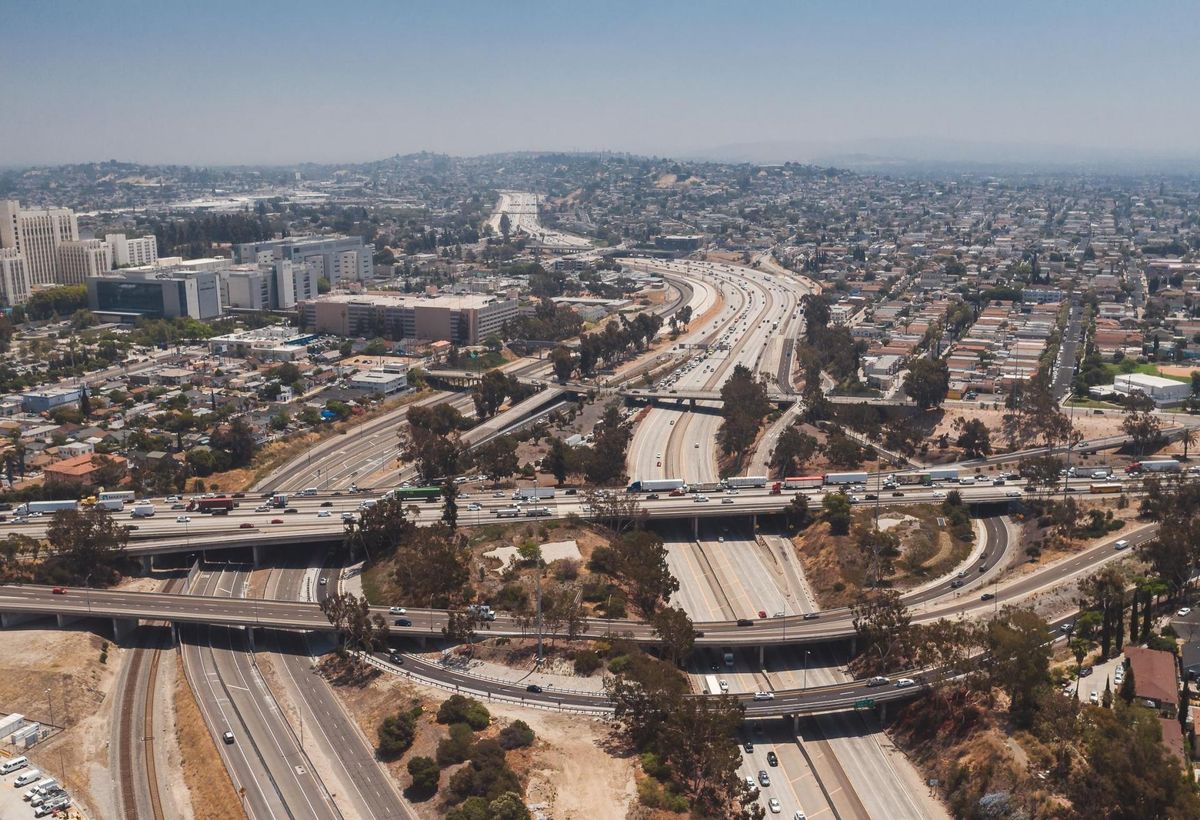 Trucks in traffic on the freeway in LA

The $1 trillion infrastructure bill passed last week is expected to pave the way for major investments in commercial real estate, but is it enough to address the bottleneck at California’s ports that has consumers and businesses concerned about receiving goods in time for the holidays?

“Eliminating the bottleneck requires not only money, but operational changes,” said Tom O’Brien, executive director at the Center for International Trade and Transportation.

The movement of goods through the entire country happens on a system that is outdated, experts say, and while this investment is a good start, it will take greater systemic changes for California — and the rest of the country — to make serious, much-needed headway.

The infrastructure bill, which sets $17B aside for ports across the country, is not likely to have a visible impact in the near term given the far-reaching roots of the supply chain problem, according to O’Brien. The issue isn’t just ships waiting off the coast to unload goods; the congestion is being felt across the entire network that moves goods around the country, including roads and bridges.

The government is thinking for the long term when it comes to port investment, according to Gregg Healy, vice president and head of industrial services at Savills. The bill won’t provide direct relief for this holiday shopping season, with the first of the funds not yet allocated, but is expected to help in future years, especially during periods of higher volume, like during the pandemic.

Healy and O’Brien agree that while the $1 trillion Infrastructure Investment and Jobs Act will certainly help the nation play catch-up with its decades-old infrastructure, the country should be more proactive, rather than reactive, when it comes to future investment.

While federal funding dedicated to infrastructure improvements is long overdue, getting the money is only part of the issue in California.

Just as Southern California ports are experiencing a larger logjam than the rest of the country, with record demand causing record cargo levels at the Ports of Los Angeles and Long Beach, the region will have a harder time than its national counterparts in getting projects done.

“It would be fair to assume, all being equal, that it will take a lot longer for us [in California] to drive things to fruition than it would be in other states,” said Nick Vyas, executive director for the Center for Global Supply Chain Management at the University of Southern California’s Marshall School of Business.

The Port of Los Angeles

Vyas said California has more regulations than some other states, which means there are more hoops for these projects before they get underway, potentially delaying timelines.

The ports of Los Angeles and Long Beach, for example, must contend with regulations that other ports don’t have, O’Brien said, with some fixes that might be complicated to address.

“There are a lot of layers, approval and consensus that would have to build … It’s a more complex problem than giving the terminals money and getting things done,” Vyas agreed.

With no guarantee yet as to how much the nation’s busiest ports will receive and when those funds will be available, short-term infrastructure solutions are often coming from the ports themselves.

At the ports of Los Angeles and Long Beach, which together process more than 40% of the containers that arrive in the United States, operators are using tried-and-true techniques that they’ve used before in times of congestion, O’Brien said, while they await federal funding for larger projects with longer-term effects. This includes imposing fees for containers that languish after being unloaded to increase efficiency.

Though many ports across the country have experienced similar congestion issues to the ports in Southern California, LA and Long Beach’s issues are magnified by the scale of those problems — more ships waiting, more containers piling up.

As e-commerce grows, so too does the desire for last-mile warehouse space, Healy said. Retailers seeking strategic distribution hubs to cut down on transportation costs have so far driven the seemingly insatiable demand for certain industrial real estate over the past two years, especially in the LA and Long Beach area.

Even now, as early reports on the status of the supply chain ahead of the holiday shopping season seem positive, increased spending compared to last year is still hampering the ability of the flow of goods to catch up, Bisnow has reported. Dozens of ships are still waiting in the San Pedro Bay to get into the ports at Los Angeles and Long Beach, even if they’re no longer setting records with their numbers.

“You can’t decongest the ports and then put the cargo onto a congested transport network. You’re not helping yourself if you do that,” O’Brien said.

The same dramatic change that disrupted supply chains nearly two years ago — pandemic-prompted adoption of e-commerce at record levels — has made a lasting shift on the way people consume goods, Healy said. The ports are often held up as an example of the nation’s supply chain issues, but that’s just one part of the chain.

It remains to be seen what kinds of port projects are aided by the infrastructure bill, though there is a clearer picture for the amount of money that California will receive for improvements to roads, highways and bridges — the infrastructure category that the majority of the federal money is earmarked for. California could receive roughly $30B for these types of projects alone over the next five years, according to a government fact sheet outlining states’ expected shares of the more than $1 trillion Infrastructure Investment and Jobs Act. The state is also able to bid for an additional $28.5B for physical infrastructure projects.

“That’s kind of the most basic stuff that we have to fix — it’s not really planning ahead or getting better. It’s just getting up to where we need to be,” Healy said.

While glad that ports are getting all this attention, O’Brien hopes that the infrastructure bill is indicative of strong government interest in the entire transportation system that’s vital to the nation’s economy.

“It has to be an approach that’s more systemic in nature, that looks at all of the connections that make the supply chain work,” O’Brien said.

Share
Facebook
Twitter
Pinterest
WhatsApp
Previous articleWhat is Iman Shumpert’s net worth? A look at the business ventures of the latest winner of Dancing With The Stars
Next articleRetail ‘smash-and-grab’ looters are the Democrats’ own making
nxtgen