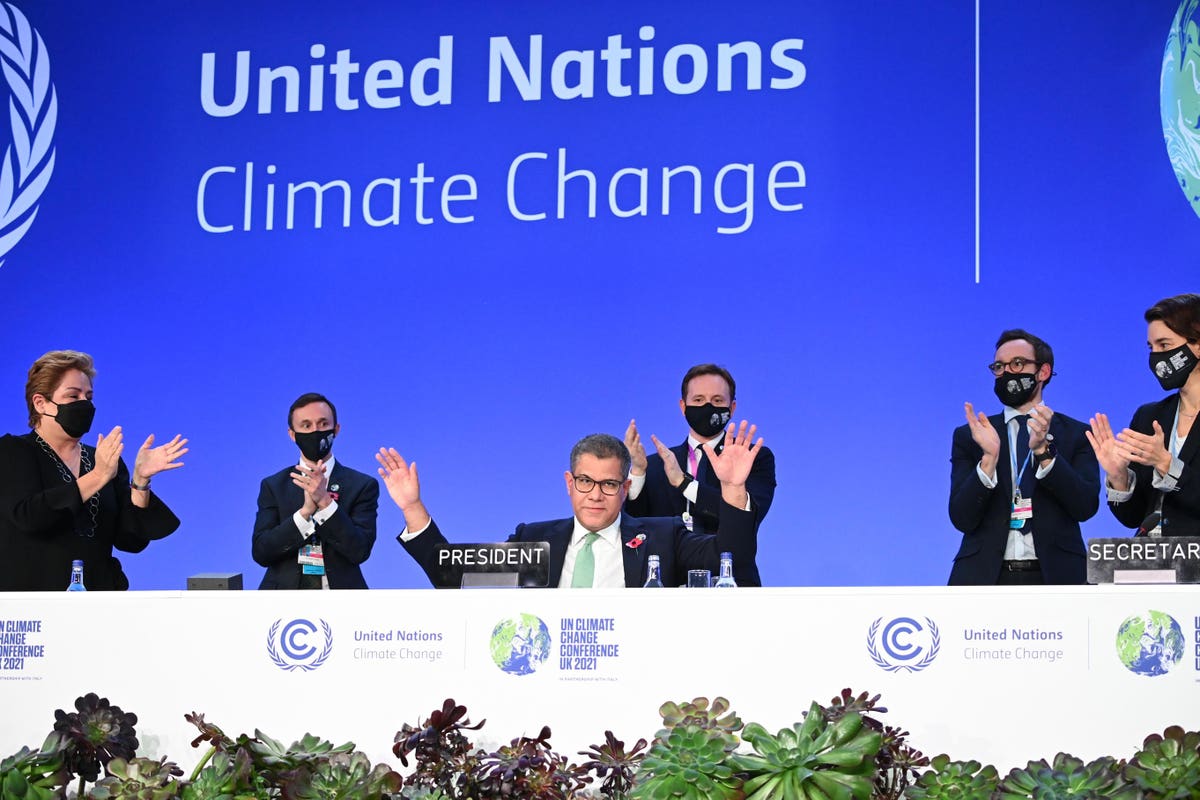 GLASGOW, SCOTLAND – NOVEMBER 13: COP26 President Alok Sharma receives applause after giving the … [+] closing speech as he attends the Closing Plenary of the COP26 Climate Summit at SECC on November 13, 2021 in Glasgow, Scotland. COP26 has concluded with nearly 200 countries agreeing the Glasgow Climate Pact to keep 1.5C alive and finalise the outstanding elements of the Paris Agreement. (Photo by Jeff J Mitchell/Getty Images)

Less than five years ago, experts agreed that combustion engines would dominate the road for several more decades. And now, as electric vehicles (EVs) reached 10% of the global passenger vehicle market in October 2021, we have consensus that the ICE’s days are numbered. And remember why: they are grossly inefficient, wasting 80% of the energy in a gallon of fuel as heat, and are the primary sources of greenhouse gases (GHGs) and toxic air pollution that disproportionately burden communities of color.

Accelerating this clean vehicle transformation will require leveraging every policy tool available, from subsidies that drive down EV prices to public investment in charging infrastructure. Importantly, ZEV standards—a policy that requires automakers to progressively increase their share of ZEV sales every year —is foundational to success.

How did we get here?

People think Tesla’s innovation is the reason EVs are taking over the world, but that misses the starting point. The early heroes are California Assemblywoman Fran Pavley, who authored Assembly Bill 1493 in 2002 to regulate GHG emissions from motor vehicles, and Mary Nichols, the Board Chair of the California Air Resources Board (CARB), and her staff who turned that bill into a 2009 requirement for  automakers to progressively reduce tailpipe emissions. This foundation led CARB to create the Advanced Clean Cars program, California’s latest ZEV standard.

When the Pavley standards went into effect in 2009, Tesla was a struggling company that had only sold a few hundred vehicles. The Advanced Clean Cars program handsomely rewarded EV sales, allowing companies that exceeded California’s regulatory requirement to bank and sell ZEV credits to other companies that continued selling ICEs.

To Tesla’s credit, they seized the opportunity and made attractive, futuristic EVs while earning substantial revenue for selling their California ZEV and GHG credits. In fact, almost 10% of Tesla’s revenues came from these programs in the company’s early years, tipping Tesla’s balance sheet from deficit to profit at crucial junctures.

California policymakers, and Air Board staff in particular, eagerly assisted their public service counterparts around the world, to propagate this successful standards-innovation model, often going beyond the call of duty. These collaborations led the world’s largest vehicle market, China, to adopt the New Energy Vehicle (NEV) program in 2015, based on the California model.

International Council on Clean Transportation analysis shows how the NEV program and a variety of other local and national policies are the main reason for the exponential growth of China’s EV market—now the largest in the world. Smart policy stimulated both demand and supply, which drove rapid expansion in the number of Chinese EV manufacturers, who have gradually expanded into markets beyond China. And, crucially, policy-driven increases in EV deployment led to rapidly falling battery prices.

European Union legislators watched and learned from the success of the Chinese and California programs. And when the political window for ambitious climate policy opened in the summer of 2021, they took advantage of favorable battery price trends when proposing EU-wide regulations that would essentially require automakers to only sell ZEVs by 2035.

A new technology will only be broadly adopted if it is desirable, inexpensive, and accessible. For technologies that need advanced manufacturing techniques like batteries and automobiles, global scaling is critical for rapid improvement. But since most new technologies cannot find buyers when they are too expensive—before learning curves and economies of scale kick in—they are stuck in a vicious cycle.

ZEV standards and incentives are essential to overcoming market failures and resulting technological paralysis. Unlocking one side of the equation with policy action drives down prices, increasing market share and generating further price drops, thus causing a virtuous cycle.

When China enacted its NEV program in 2015, EVs were seen as a small part of the solution to decarbonize road transport. Even at the historic Paris Agreement, the centrality of the ICE vehicle for the foreseeable future went unquestioned.

But just five years later, global policymakers and automakers in Glasgow set the stage for the end of ICEs as we know it.

A new direction for cars and our planet

The first generation of vehicle standards and complementary policies were designed to create a foothold for EVs in the global market. EVs made up 10% of global auto sales in October—it’s clear that foothold has been achieved.

In fact, Bloomberg New Energy Finance, now forecasts that EVs in some segments will be cheaper than ICEs, as early as next year. After toiling for decades, vehicle regulators will find themselves in a place where they have never been—the technology that can save the climate is cheaper to buy than the one that worsens it.

Unfortunately, that does not mean public officials can relax: falling clean technology costs do not preclude the need for climate policy. Without smart policy, the transition from ICEs to EVs will progress far too slowly to keep 1.5°C targets alive. Note that it took several decades after the first ICE was sold to mark the end of the horse and carriage. In the ongoing energy transition, renewables have been cheaper than coal for several years, but coal remains the top global emitter as it stubbornly clings to niche markets and protected government subsidies.

As EVs become cheaper, the onus is on automakers to show why polluting ICEs should continue to be sold. The burdens of volatile gas prices, foul air, and GHGs—which fall disproportionately on low-income communities of color—can be shed with a rapid EV transition.

Clean air officials and their allies should now focus on engineering the fastest technology transition that transportation has ever seen. That begins with taking full advantage of forthcoming subsidies, accompanied by more stringent ZEV standards with even faster schedules than those proposed by the European Union. It includes a suite of policies ensuring a rapid buildout of charging infrastructure to meet the needs of an equitable EV transition. And, where needed, these should be complemented with policies that enable a smooth transition for labor. If we do that, 100% sales can be achieved in the major markets like Europe, China, and the U.S. even before 2035.

Fortunately, innovators have pushed EVs to cost-parity with ICEs, and policymakers have the tools they need to complete this transition rapidly. Now it’s time to deploy these tools and clear every possible roadblock to transforming the market to EVs.