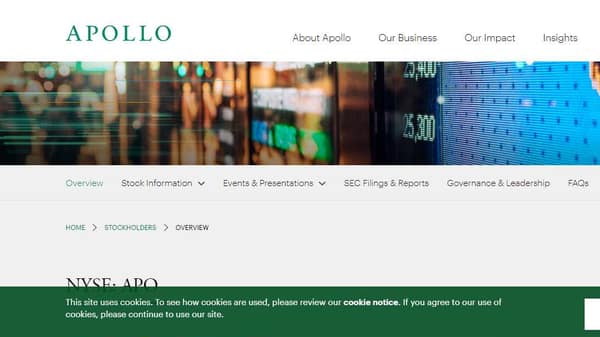 Apollo Global Management Inc. has agreed to buy the U.S. wealth-distribution and asset-management businesses of Griffin Capital Co., marking a big step in the investment giant’s plan to expand its offerings for wealthy individuals.

The deal will be paid for with Apollo stock, the firm said Thursday. Apollo declined to disclose the price it is paying for the two business units, which make up the majority of Griffin.

The Wall Street Journal earlier reported that Apollo had struck a deal to buy the Griffin units.

A closely held investment firm based in Los Angeles, Griffin has about 60 client-facing employees focused on distributing investment products tied to assets such as private credit and real estate to wealthy individuals. It has a particular focus on independent broker dealers, a distribution channel in which Apollo and its main rivals currently have less of a foothold than they do with private banks or big brokerages such as Morgan Stanley or Bank of America Corp.’s Merrill Lynch Wealth Management.

As part of the deal, Apollo will also get technology, other infrastructure and hundreds of distribution agreements to bolster its Global Wealth platform.

Apollo is also buying Griffin’s asset-management business, which includes an investment team and more than $5 billion of assets under management in products designed for individual investors.

Griffin in 2014 was one of the earliest firms to launch a fund with an interval structure, meaning it periodically offers investors the option to sell back a portion of their shares, allowing for greater liquidity than with a typical private-equity or credit fund.

For Apollo, which has become a $481 billion behemoth primarily by catering to institutions such as insurance companies and pension funds, the deal accelerates its push to reach the universe of individual investors known as the mass affluent. In October, the firm set a target of raising more than $50 billion of capital for its Global Wealth business over the next five years, one of the key growth initiatives laid out by Marc Rowan, the new chief executive officer.

Apollo executives estimate that the Griffin deal will accelerate that effort by about 18 months.

“This acquisition is highly complementary to what we’ve been building organically,” said Stephanie Drescher, Apollo’s chief client and product development officer. The Global Wealth business would have about 100 employees when the deal closes, she added.

Many of its private-equity rivals are also racing to raise money from individual investors, who, like institutions, are eager for greater yields in an era of ultralow interest rates. Individual investors are one of the biggest sources of growth at Blackstone Inc., which has had success with products such as a nontraded real-estate investment trust and a private-credit fund designed for individuals.

In May, KKR & Co. launched its own real-estate vehicle aimed at individuals.

Apollo’s vast credit business, which already contains an array of products with different risk-return profiles, has significant potential for retail offerings. In November, it launched one, a nontraded business-development company known as Apollo Debt Solutions.

* Thank you for subscribing to our newsletter.