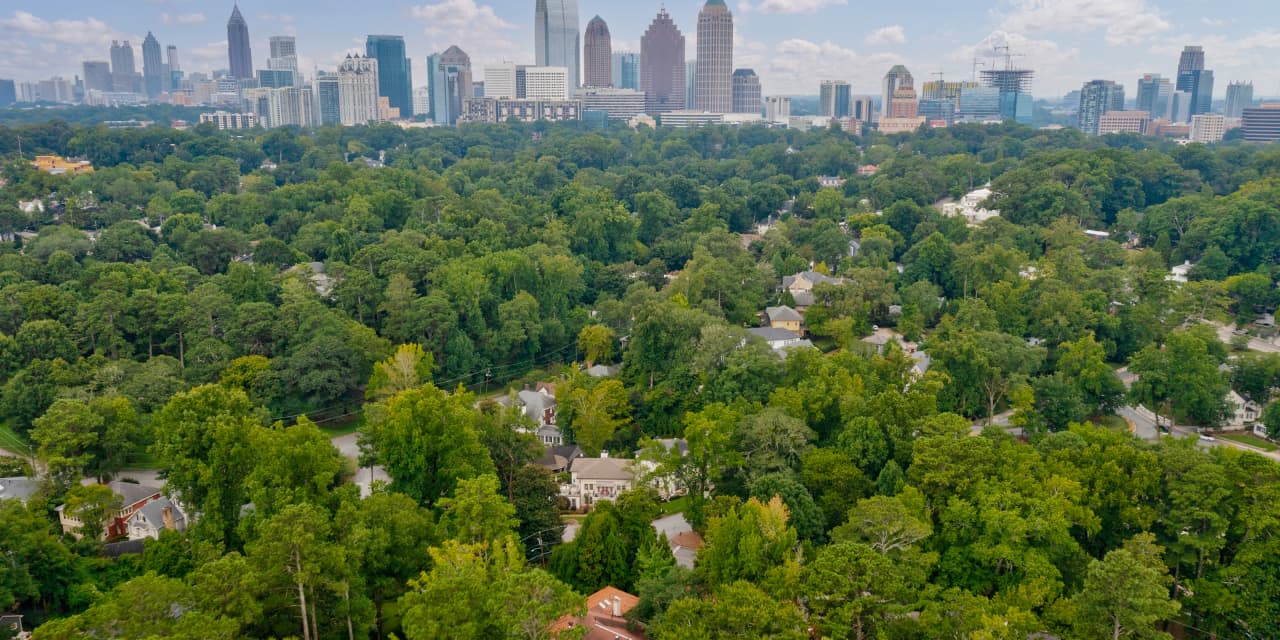 Ansley Park, centrally located within Atlanta’s Midtown area and developed in 1904, is one of the city’s oldest and most upscale neighborhoods. Around 60% to 70%of homes date between 1910 to 1930.

“The neighborhood community was designed to be parklike, and inspired by Frederick Law Olmstead [who is best known for his work on Central Park in Manhattan],” said Yetty Arp, a real estate professional from Atlanta Fine Homes Sotheby’s International Realty. “That’s why there are so many beautiful parks, lots of green space and beautiful, old trees within Ansley Park. It prides itself on these parks. The lots are smaller than what you’ll find in the outlying neighborhood communities. You have wonderful parks to bring people together.”

In many ways, the neighborhood bears resemblance to Central Park. “It’s an urban neighborhood that feels suburban because of its streets lined with hundred-year-old oak trees along with views of the Atlanta skyline,” said Jason Cook, an agent from Ansley Real Estate. Some of its parks have playgrounds, while others offer green spaces with walking trails.

More: Island Park: A Canadian Nabe With the Rare Combination of Privacy, Scenery and Trendy Dining and Shopping Spots

Three miles north of downtown Atlanta, Ansley Park encompasses 275 acres including Ansley Golf Club along its northeastern border. It shares a southwestern, mile-long border with Piedmont Park, Atlanta’s largest public park and the home of the Atlanta Botanical Garden. The neighborhood’s western border runs a stone’s throw from I-85, and Beverly Road NE serves as the northern boundary until it lines up with Ansley Golf Course. The neighborhood is a designated Historic District located less than two miles from Georgia Institute of Technology and about a 25-minute drive from Hartsfield-Jackson Atlanta International Airport.

“The most expensive homes are closer to Peachtree Street because they’re the older, more grand homes,” Mr. Cook said. “There are streets close to the Ansley Golf Club and closer to Piedmont Park that are very desirable, too. A handful of streets overlook the parks and those homes come with a premium.”

In Midtown and a mile south on Peachtree Street, Google opened a new office in September. On the same block, a new condominium at 40 West 12th St. outperformed the Ansley Park market with a residence selling for over $1,000 per square foot.

“If something hits the market and it’s priced right, it’s going to get gobbled up on the first day because there’s not much inventory,” Mr. Cook said.

Ms. Arp said that inventory is low enough that she’s seeing as much as 1% inflation per month in residential real estate prices.

This four-bedroom, six-bathroom luxury estate in Ansley Park is currently asking for $3.495 million.

More: Gigiri Is at the Heart of Nairobi’s International and Diplomatic Communities

Compared to Buckhead, the luxury enclave roughly seven miles north of downtown Atlanta, Ansley Park’s lot sizes average about a quarter of the size, and the homes are about half the square footage. But unlike Buckhead, Ansley Park is walkable to museums, the Atlanta Symphony Orchestra, the Atlanta Botanical Garden, golf courses, restaurants and shopping.

Mr. Cook represents the sellers of a home on Beverly Road NE, a Lowcountry four-bedroom house offered at $2.15 million.

Nearby, Ms. Arp represents the sellers of a very different style home on the same street. It’s a transitional house with a contemporary interior and a traditional Mediterranean-style shell, and it’s listed for $3.495 million. 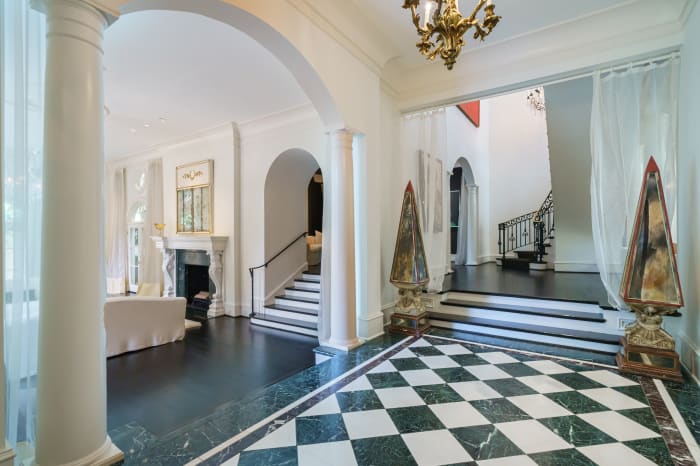 Interior view of a four-bedroom luxury estate in Ansley Park.

What Makes It Unique

The architecture in Ansley Park is varied and diverse, and includes traditional Georgian, Federal, Regency, Renaissance-revival and modern styles. Ansley Park was home to the governor’s mansion until 1967 when it moved further north in Atlanta. Supreme walkability and a slew of luxury amenities contribute to the uniqueness of the neighborhood.

Ansley Park is adjacent to Piedmont Park and the Atlanta Botanical Garden. Residents can walk to the Woodruff Arts Center, the home of the Atlanta Symphony Orchestra, the Alliance Theater and the High Museum of Art. MODA (Atlanta’s museum of design) and Colony Square are also within walkable distance.

“Colony Square, on the edge of the neighborhood, was just redeveloped. It has an IPIC Theater, some great new restaurants and shopping. It was the first mixed-use development in the southeast and originally built in the 1960s,” Mr. Cook said.

Ansley Park is along the BeltLine, a revitalization effort comprising 22 miles of unused railroad tracks around Atlanta’s in-town neighborhoods. Residents can participate in bike tours, enjoy arboretum walking tours and visit many city parks also located on the BeltLine. 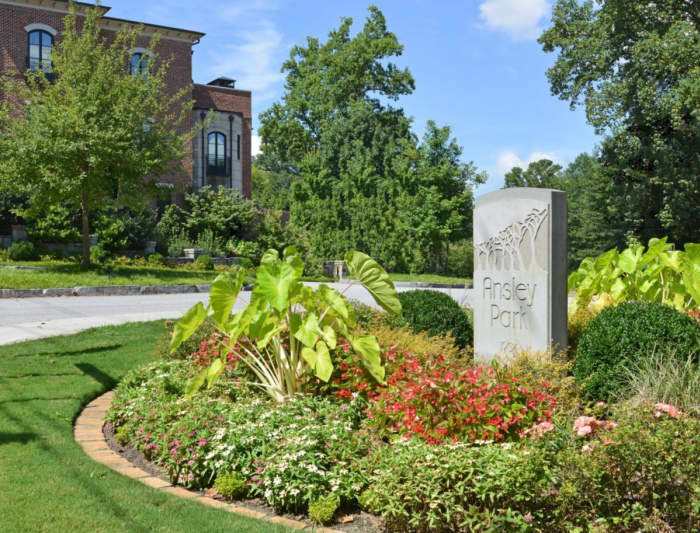 The neighborhood is home to two private country clubs, Ansley Golf Club with a nine-hole course and the Piedmont Driving Club.

Top rated schools are located within a 20-minute drive of Ansley Park. Many residents utilize Morningside Elementary, as it’s one of the most desirable public schools in the city. The Paideia School is a popular private school for pre-K to 12th grade. Westminster Schools, Pace Academy and the Lovett School are top choices among parents seeking private schools for kindergarten through 12th grade.

Both Mr. Cook and Ms. Arp said many home buyers are local or come in from California or New York. Within Atlanta Fine Homes Sotheby’s International Realty, 8% to 10% of buyers are international.

“I’ve also seen a lot of people moving into town from Buckhead because they want to be where all the action is near the BeltLine,” Mr. Cook said. “They want to be somewhere their kids want to visit when they come home, and have stuff to do.” 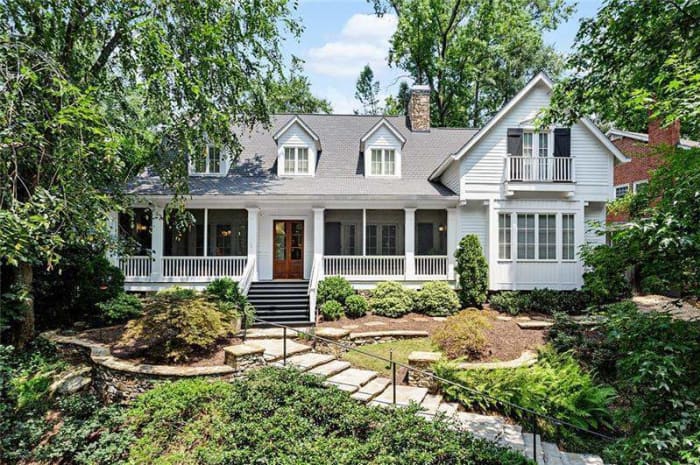 This four-bedroom residence adjacent to Ansley Golf Course is currently asking for $2.15 million. 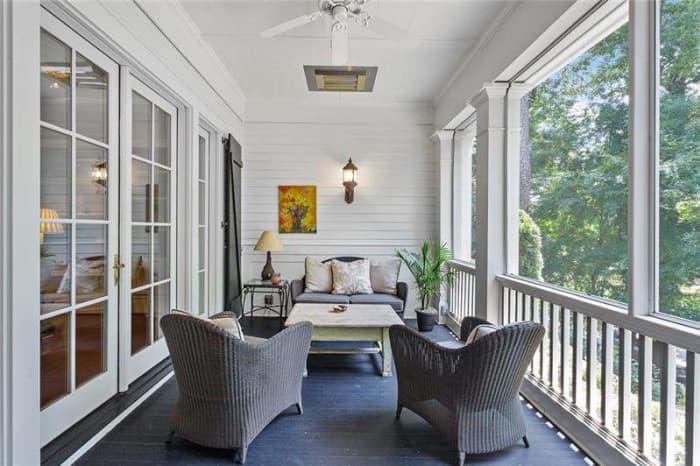 This four-bedroom residence adjacent to Ansley Golf Course is currently asking for $2.15 million.

More: Hove Lawns Offer Regency Townhouses and Luxury Bungalows a Stone’s Throw From the Sea in Balmy Brighton and Hove

The most expensive home sale this year was $3.9 million and Atlanta Fine Homes Sotheby’s International Realty set the overall record in 2016 with a $5.4 million home sale.

“Both were off the market, which is how about a quarter of the houses sell here,” Mr. Cook said. “You just have to be in the know.”

He said expected that next year will be active because of pent-up demand. Mr. Cook also forecasted an increase in supply in the neighborhood. “Everyone’s looking for the same thing. There will be new listings after the new year, but inventory will still be low,” he said

Ms. Arp said given the proximity to Midtown, which is attracting new business and development, Ansley Park is “the most desirable intown community.” Because of low inventory, she said she expects housing prices to increase in the next year.

Click for more profiles of high-end neighborhoods around the world