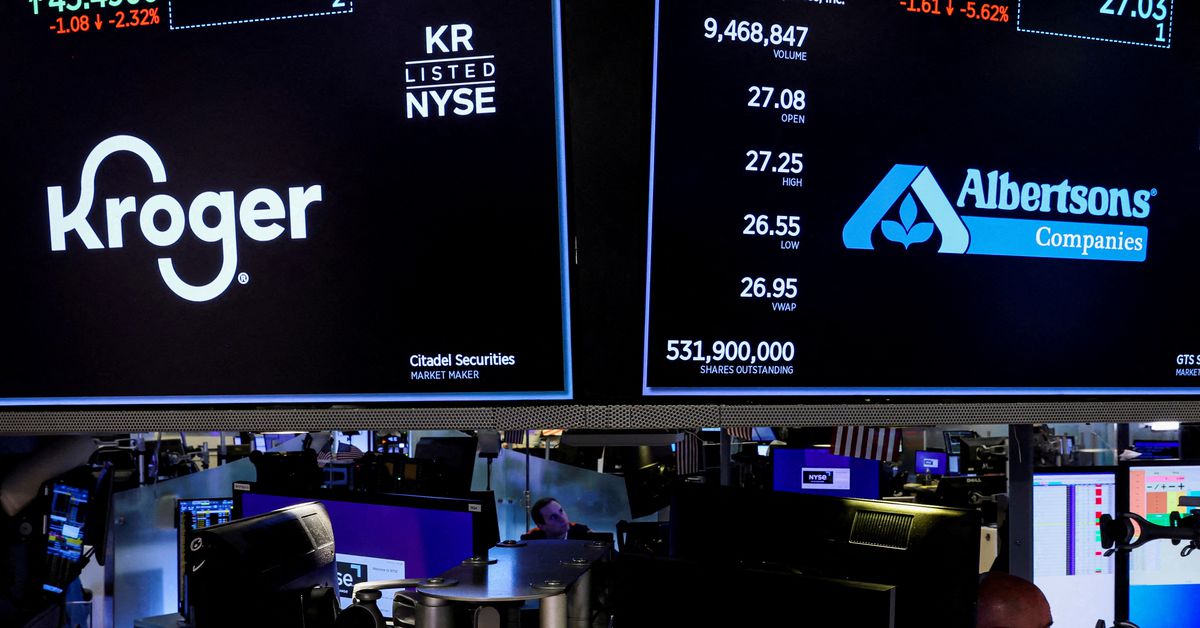 WASHINGTON, Nov 29 (Reuters) – Top executives at Kroger Co (KR.N) and Albertsons Companies Inc (ACI.N) are expected to face tough questions on Tuesday from lawmakers who worry the grocers’ planned $25 billion merger will push up food prices at a time when inflation is a concern.

Kroger Chief Executive Rodney McMullen and Albertsons’ chief, Vivek Sankaran, will go before the Senate Judiciary Committee’s antitrust panel, some of whose members have already criticized the deal.

Senators Amy Klobuchar, chair of the antitrust panel, and Richard Blumenthal were among those who signed a letter to Federal Trade Commission Chair Lina Khan, saying the merger “raises considerable antitrust concerns.”

The deal has also been criticized by unions and progressive groups, which have argued that the merger would exacerbate income inequality through job losses and eroding wages and have urged the FTC to block the deal. read more

The merger is being discussed at a time when the Biden administration is determined to bring down inflation. U.S. consumer prices did rise less than expected in October, pushing the annual increase below 8% for the first time in eight months. Food prices increased 0.6%. read more

The companies, knowing the deal would be controversial and that antitrust enforcement has become tougher, offered an aggressive plan aimed at resolving concerns when they announced the deal, which would bring nearly 5,000 stores under one corporate umbrella, ranging from Safeway to Ralphs and Fred Meyer.

The companies have said they expect to sell between 100 and 375 stores to allay government concerns. Ideally, they would like to find buyers for the facilities but could also put them into a new company that would be owned by Albertsons’ shareholders. UBS has said it believes the plan will satisfy antitrust enforcers.

This plan could force the FTC, which is probing the deal to make sure it is legal under antitrust law, to not only prove in court that the transaction is illegal but that the proposed remedy is inadequate.

The companies may also draw fire on Tuesday for a widely criticized plan to give Albertsons’ shareholders a $4 billion dividend payment. A Washington state court put that plan on hold with the next hearing set for Dec. 9. Separately, the attorneys general of Washington, D.C.; California and Illinois have also sued to stop that payment, arguing it would weaken the company’s ability to compete. read more

Reporting by Diane Bartz in Washington; Editing by Matthew Lewis and Jonathan Oatis

Focused on U.S. antitrust as well as corporate regulation and legislation, with experience involving covering war in Bosnia, elections in Mexico and Nicaragua, as well as stories from Brazil, Chile, Cuba, El Salvador, Nigeria and Peru.