Academia, displacement, and the dorm-industrial complex 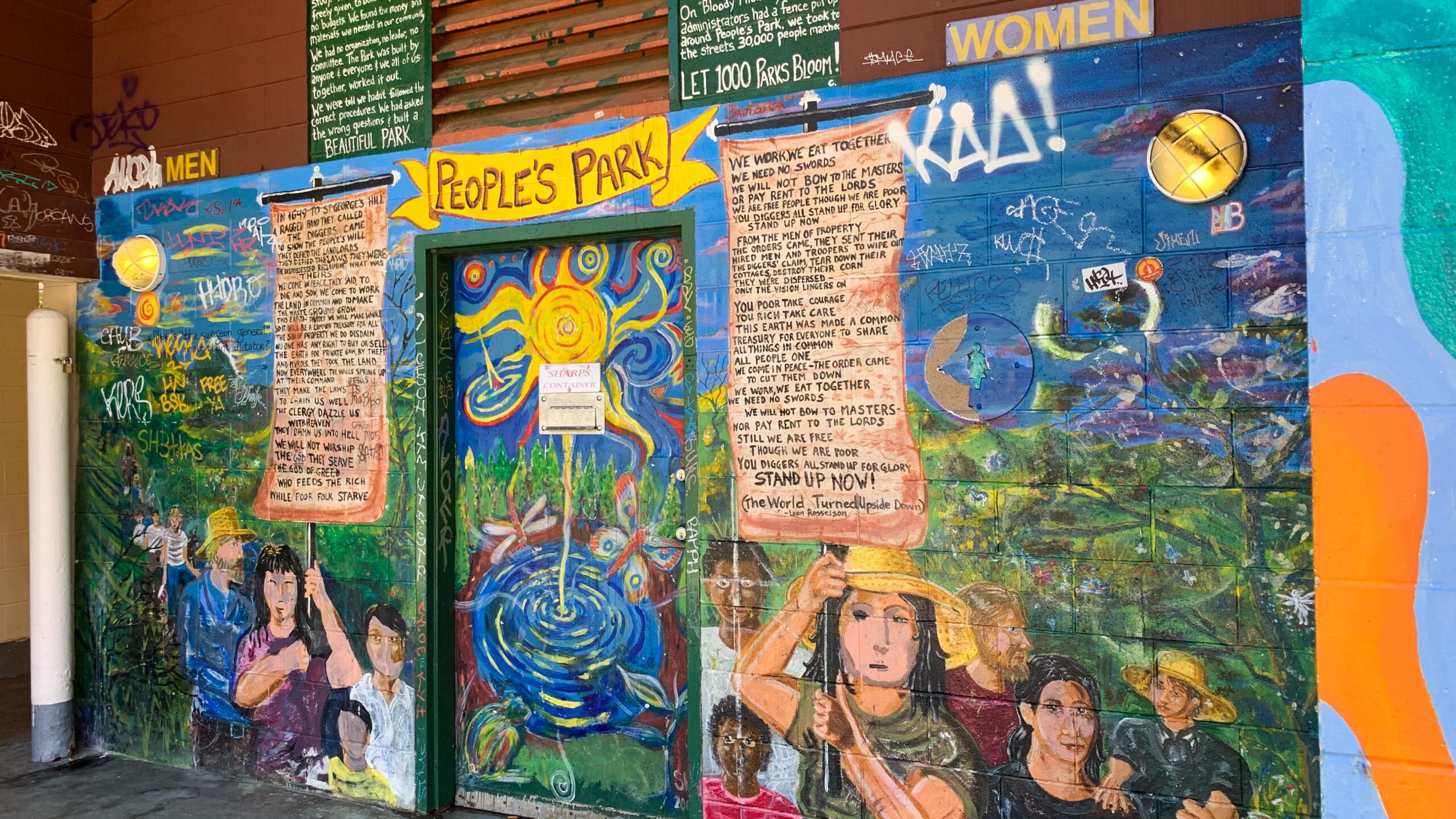 “Columbia University built the Manhattanville campus and caused the eviction and displacement of hundreds of low-income tenants, and will be bringing in more students which will cause more housing shortages and more displacement,” said Rosie, a Columbia University student and member of Columbia Housing Equity Club. Her and this formerly houseless povertyskola stood together as we began our Stolen Land/Hoarded Resources UnTour in occupied Lenape Territory outside the Greco-Roman pillars that marked the front of the infamous Columbia University campus.

“UC Berkeley is building an 11-story student housing building, which is taller than all the student housing they currently have. None of the current houseless residents of People’s Park have been offered homes in the so-called affordable housing part of the project and probably never will. The little bit of affordable housing they are including won’t even be accessible to the current houseless residents of People’s Park because of the income requirement,” said June Nelson, a land liberator with Defend People’s Park to PNN-KEXU Po People’s Radio Podcast on June 14.

“The maintenance crew dispatched to People’s Park just today was taking People’s belongings and throwing them away, including a grandmother who I had just bought adult diapers for,” added Aidan Hill, another land liberator and formerly houseless UC Berkeley student who has stood up for and stayed in People’s Park for years and also spoke with us on a Po People’s podcast.

And most recently the terror we all are still collectively surviving known as the pandemic, the tiny respite of the eviction moratorium which didn’t cover most very poor tenants and was summarily ended leaving over 50,000 people across the US in eviction proceedings.

But one driver of increased removal and displacement is rarely, if ever, discussed, mentioned, or named: Academia, or the Dorm Industrial Complex.

These academic institutions from Berkeley to Philadelphia, from Temple University to San Francisco and Los Angeles, continue the land theft of the original colonizers—which, incidentally many of the buildings on their “campuses” are named after—expansion, land theft, removal and violent gentrification under the guise of “student housing,” which is really a cover for a giant pyramid scheme.

These institutions aren’t building student housing for all students; they are building luxury student housing, which means the only students who will be housed in this 21st Century model is the children of wealth-hoarders, which often times leaves poor students houseless.

Luxury housing for college and university students across the US has become a multibillion-dollar industry for universities, with apartment buildings featuring pools, clubhouses, and spin studios.

“I was homeless for many of my years at Berkeley,” said Max C, a graduate of UC Berkeley, who is now a resident of Hayward. “I could not afford the so-called student housing and there is a severe housing shortage in Berkeley so there was never anywhere else I could afford to live. Being homeless while in school is so stressful, and I almost didn’t graduate.”

Some students get a housing stipend as part of their financial aid, but it typically covers only the cost of dorms or less expensive off-campus options.

And the only way that students can live in these places is by agreeing to work in them in exchange for discounted or even free rent. There is at least one class-action lawsuit alleging that this has essentially made them the equivalent of indentured servants to their wealthier classmates.

The only other option, or the concurrent option, is to borrow huge sums of money from an exploitive banking system that forces students to take on debt that can ruin their lives—and often can keep them out of community work because they desperately need high incomes to cover the usurious payments.

Columbia University has an extensive history of evicting Black and poor tenants to make way for an ever-expanding campus. The resistance of tenants spanned decades, and one of their warriors was a revolutionary white woman known as Marie Runyon, who was a resident of the Morningside Heights neighborhood and was evicted by Columbia—along with other tenants, she refused to move, holding out for years.

“My mom and many of the tenants being evicted by Columbia refused to leave, and the court battle with them spanned several years,” said Brian Barth, Mrs. Runyon’s son, who joined us as we stood in front of the Columbia University’s president’s mansion, another terrifyingly blatant example of the colonial aspect of all these wealth-hoarding, land-stealing institutions.

“In the 1950’s,” Aidan told the PoPeople’sRadio Newz Hour, “UC Berkeley acquired People’s Park through eminent domain. Michael Delacort and other anti-war activists co-founded it to do a free speech rally. People’s Park was a sanctuary garden for the Black Panther Party. The purpose of the park at its core is about Survival under capitalism.”

Aidan continued, “The new chancellor decided to build on People’s Park, and in 2019 they cut down 40 trees. Many people resisted, but UC continued with its plan-until Andrea Henson fought a court case blocking the further displacement of people without offering them accommodations as this is cruel and unusual punishment.

This povertyskola, who grew up in homelessness with my mama and was arrested by UC Berkeley police for being houseless in that settler town, and eventually did three months in Santa Rita County jail for the act of being houseles, has been triggered into extreme depression by the ways so-called progressive Berkeley has operated.

“They have my relatives in their basement,” said Corrina Gould, Ohlone/Lisjan leader, prayer warrior, and co-founder of Sogorea Te Land Trust, in POOR Magazine’s Stolen Land/Hoarded Resources UnTour held in May of 2021.

We launched the UnTour of that akkkademik site following the UnTour of UC Hastings  where in both cases we proposed a “#LandBAck proposal, because UC Berkeley, in collaboration with police agencies, is not only stealing land, trees, housing, and tents at People’s Park and buildings of rent controlled housing such as on Walnut street they are also, like so many of these institutions, warehousing Indigenous ancestors, which is all connected.

“People’s Park is on Ohlone land,” concluded Aidan, “and I believe it was created for all the children in the future—the next seven generations. People’s Park was based in notions of radical activism that included the Women’s Movement, Gay Liberation, free speech and so many more, always anti-fascist, always pro-poor.”

Aidan and all of us are standing on the shoulders of so many warriors like Michael Delacourt, David Nadel, and Osha Neuman and Rosebud Abigail Denovo who broke into the campus home of Chang-Lin Tien, Chancellor of the University of California, in 1992 for liberation of the park.

The collective work of Defend People’s Park and Columbia University Housing Equity Project is essential, and conscious professors and students need to join to support and resist along with all the community members and houseless relatives who have stood up and spoken up for generations. Mama Earth and all of us poor and houseless mamas and families need to be listened to with our own solutions like Homefulness, the Poor People’s Army resisting the academic colonization of Temple University and the DegentriFUKation Zones we launched in East Huchuin (Oakland) so we don’t all end up in the very real violence of the UnHoused Nation.